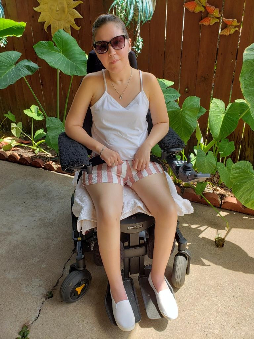 Sandra Mora has had a series of personal goals she has been working towards as a patient at TIRR Memorial Hermann. She wanted to stand as a bridesmaid at a friend’s wedding as well as help her daughter prepare for her modeling jobs. Finally, she wanted to take her kids to Disney World. She has checked the wedding off her list and is working towards her other personal goals with the help of her therapy team.

Sandra fell at her home in 2016, and the resulting blow to her head caused a brain stem hemorrhage and thrombosis stroke. She doesn’t remember very much about her fall or the inpatient hospital stay at Memorial Hermann-Texas Medical Center, but from what she has been told by her family, her situation was dire. However, she persevered and after 2 months in acute care it was determined she was medically stable enough to begin her rehabilitation journey.

Upon arriving at TIRR Memorial Hermann in the Texas Medical Center in November 2016, Sandra was unable to move or speak–her diagnosis was Locked-In Syndrome, a neurological disorder characterized by complete paralysis of voluntary muscles, except for those that control the eyes. People with Locked-In Syndrome are conscious and can think and reason, but are unable to speak or move.

“I have known Sandra since 2017, when she had her first bout of outpatient physical therapy at TIRR Memorial Hermann Outpatient Rehabilitation at the Kirby Glen Center,” said her physical therapist Gail Greene. “She is one of the hardest working patients I have had. Each time she has come to outpatient therapy, she has had very specific goals and worked very hard to accomplish them. She has used everything that we have offered her–always ready to try new things. Sandra worked in aquatics, used the Lokomat®, participated in Strength Unlimited, and works tirelessly on her exercises at home. I believe this is one of the things that sets Sandra apart–her drive to always get better.”

Sandra says that she has progressed a lot thanks to her therapy sessions. “Now I can stand up for one picture while holding on to something for stability,” she said. “I am very proud of that because previously I couldn't do anything. Of course, it wasn't easy. It has taken a lot of dedication and concentration. We have set goals that we have accomplished; some faster than others.”

Speaking and eating are other areas that Sandra is focusing on as part of her rehabilitation. 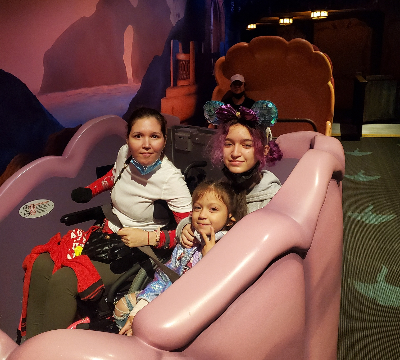 “In the beginning, Sandra had no initiation of a swallow," said her speech language pathologist, Rachel Zuckman. "Using taste triggers and neuromuscular stimulation as a modality, she started to initiate a swallow. We also worked with the Iowa Oral Pressure Instrument (IOPI) to address her tongue strength and movement along with manual tongue therapy. Her tongue strength difficulty impacted both swallowing and speaking. As her mobility for her tongue started to improve for swallowing, Sandra started to initiate oral communication and move away from the use of her augmentative and alternative communication (AAC) device, which she had used for over 2 years as her sole means of communication. At that time, we started to initiate speech drills to improve her oral movement, articulation and coordination of her speech. When she came to outpatient therapy, she was not able to eat by mouth, but now she is eating 50 percent of her food by mouth and getting the rest of her nutrition through her percutaneous endoscopic gastrostomy (PEG) tube. We are working towards her being able to remove her PEG tube within the next year-and we are practicing so that when she takes her kids to Disney World, she will be able to eat some of the great food while she is there!”

Sandra is proud of the progress she has made, saying “We have done everything–from triggering a swallow, to massages, to neuromuscular stimulation. It all has helped me a lot because now I'm eating some soft solids.”

In occupational therapy, Sandra is doing exercises that will help her do activities with her children.

“We are working on strengthening her core so that she can transfer in and out of her wheelchair by herself,” said her occupational therapist, Jose Guzman. “We are also strengthening her triceps and working on the spasticity in her hand. Her younger daughter has recently gotten into modeling and Sandra's occupational therapy will allow her to assist her daughter as she is getting ready for her modeling work.”

Sandra is excited about her future and is working to continually improve for both herself and her daughters.

“Before coming to TIRR Memorial Hermann, I wasn't able to move. Now, I move more. I still have a long way to go, but it's a lot better!” said Sandra. “Also, I give credit to my mom–if it wasn’t for her help I don’t know where I would be!”