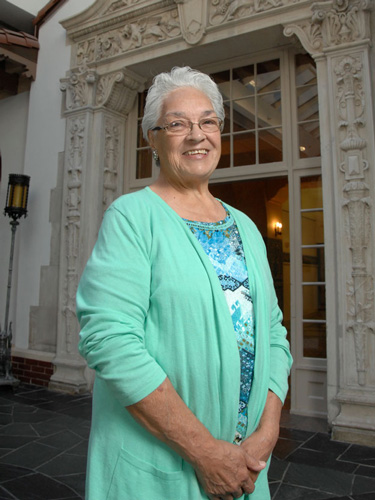 It’s been more than a year since Maria Sonnen and her daughter, Laura Sonnen, were hit from behind repeatedly by a man driving a Nissan Frontier pickup truck. The upshot of the assault was a severe injury to her left leg and near complete loss of the skin from behind her right knee to her ankle circumferentially, putting her at risk for an above-the-knee amputation. At many Level I trauma centers, the outcome would have been loss of her leg. Instead, she’s back to the life she loves.

Toward the end of January 2016, Sonnen and her daughter were in late rush-hour traffic in Houston. “We were stopped on the feeder because of construction at an exit,” she recalls. “Laura was driving. She looked in the rearview mirror and told me to hold on, that we were going to be hit from behind by a car that was coming up fast. When he hit us a second time, my daughter, who is a medical assistant, got out to make sure he was okay. We thought he might be having a heart attack or stroke. Then I got out to check on Laura.”

Sonnen was standing next to the car with the passenger door open when the driver rammed her car again, knocking her down. “I was unconscious for a short time,” she recalls. “When I woke up, I was laying on the ground on my back and felt a terrible burning sensation on my right leg. I was screaming, ‘What have you done to my leg?’ Then EMS arrived.”

At the Red Duke Trauma Institute at Memorial Hermann-Texas Medical Center, she was rushed to a trauma bay by a team that included orthopedic traumatologist Joshua Gary, MD, an associate professor in the Department of Orthopedic Surgery at McGovern Medical School at The University of Texas Health Science Center at Houston (UTHealth), and plastic and reconstructive surgeon Emmanuel Melissinos, MD.

“Both of Maria’s legs had severe injuries,” Dr. Gary says. “The right leg was degloved almost 360 degrees, with skin missing from above the knee to the mid-portion of the shin. When you’ve lost that much skin, you’re staring at an amputation. We told her family we had to see what Dr. Melissinos could do.”

In addition to the large area of lost flesh on the right leg, she had an open fracture, had lost an artery and had extensive nerve damage. “Dr. Gary stabilized the fracture, and we did a number of irrigations and debridements to gradually remove necrotic tissue to get to a situation we could control,” Dr. Melissinos says. “When we start on wounds like this, we don’t know if we’ll be able to go to reconstruction, especially if the flesh keeps dying. So we do it slowly in stages. With Maria, it was not easy to determine whether her leg was salvageable, which underscores the importance of being treated at a trauma center where physicians know how to do these procedures.”

When he found that the wound was reconstructable, the plastic surgery team proceeded with a modified radial forearm free flap and split-thickness skin grafts using adjacent skin. While the standard radial free flap carries with it significant morbidity and leaves a large secondary defect, a modified version developed by Dr. Melissinos involves taking a very small strip of skin with a larger amount of flesh around it, which leaves a line scar on the forearm.

Sonnen’s left leg had a smaller area of necrosis and a fracture with no exposed bone. “Because there was skin and flesh around it, the reconstruction was much simpler,” Dr. Melissinos says. “We debrided the wound until it was clean and found healthy tissue underneath. We partially closed it by advancing the adjacent tissues and then did a split-thickness skin graft.”

Sonnen was hospitalized for three months, then spent two and a half months in a skilled nursing facility before she was discharged to home. Her daughter stayed by her side.

“Dr. Melissinos is a miracle worker,” Dr. Gary says. “He does things other plastic and reconstructive surgeons can’t do, and the work he did on Maria gave her a functional leg. He’s one of a kind and a big reason why our center does fewer amputations than other Level I trauma centers. He’s been dedicated to his practice for 30 years now, and he really, really makes a difference in what we can do to restore function. Maria was 74 at the time of her accident. With an amputation at that age, she would likely be in a wheelchair and never walk again. On the night she came in, I would never have predicted that her outcome would be as good as it is. Dr. Melissinos made the difference.”

Sonnen did rehabilitation for three months and continues the work on her own. “It’s been a long, long process but it gets better all the time,” she says. “I’m not a quitter. I psych myself up by telling myself that I have the capability, stamina and strength to do this. Success doesn’t always come easily, and I had to do a lot of inner searching. I didn’t want to quit because it hurt.”

Dr. Gary says Sonnen is a testament to the skill of the Memorial Hermann-Texas Medical Center Orthopedic Trauma Service. “A success for us as orthopedic traumatologists is someone who, a year later, is back to function. We have the opportunity to help severely injured patients restore their life to normal, and because we see them over time, we establish long-term relationships. That strong relationship is very rewarding.”

Although she occasionally loses her balance, Sonnen doesn’t think of it as a disability. “I grab my walking cane and do my laundry,” she says. “What happened to me was a traumatic life-changing event, but if you make up your mind, you can do anything. Using my own skin and muscle, Dr. Melissinos reconstructed my leg. It’s a blessing that he took care of me. I’m not saying that what I went through was easy. It was hard and painful, but the rewards are great because I’m still here and I can walk. I can cook and bake, trim my rosebushes, and walk around my yard.”