Shawn’s Story: Free From A Lifetime of Epileptic Seizures 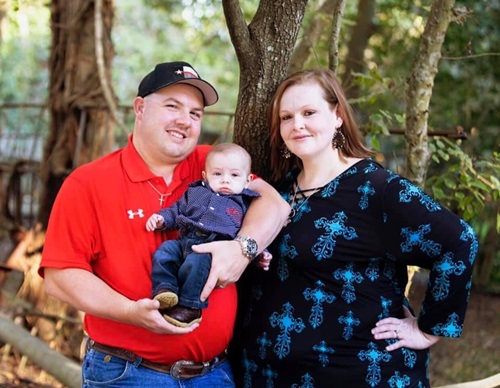 Thirty-five-year-old Shawn Crockett began having epileptic seizures when he was 6 months old. In second grade, his classmates watched in horror as he suffered a seizure that lasted more than four minutes, his skin turning blue from lack of oxygen. From that point forward, Shawn saw a neurologist once or twice a year.

Shawn was diagnosed with epilepsy, a nervous system disorder where brain activity is excessive and abnormal, causing periods of unusual behavior or seizures. An estimated 1.2 percent of the total U.S. population — about 3.4 million Americans — are affected by epilepsy. Epileptic seizures may be related to a brain injury or genetics, or they many have an immune, brain structure, or metabolic cause. But most often, the cause is unknown.

Over the years, Shawn’s doctors tried several medications, some of which caused terrible side effects, including suicidal thoughts and even an increase in the frequency of his seizures. One medication caused him to experience over 90 seizures in a single month.

When Shawn turned 18, he began researching treatments for epilepsy. Based on his findings, he traveled from his home in East Texas to multiple hospitals and treatment centers, including two in Dallas and another in Louisiana. But no one could provide a definitive diagnosis, much less a definitive cure. “One hospital said they couldn’t figure out what was wrong, but they wanted to cut out a portion of my left temporal and occipital lobe, saying they thought it might help,” he says. “I was like, ‘Nah, I think I’ll pass.’”

When Shawn was 29, he and his fiancée, Tana, moved to Houston to pursue their careers — Shawn as an EMT (emergency medical technician) and Tana as a surgical technician. Shawn asked around for recommendations for good neurologists and found Philip Blum, MD, a neurologist with Mischer Neuroscience Associates, affiliated with Memorial Hermann Memorial City Medical Center. “Dr. Blum heard my story and looked over my medical records and said, ‘I don’t want to waste your time. I don’t want to hold you up. I’m sending you to Dr. Tandon at Memorial Hermann-Texas Medical Center. Because the chance that yet another medication is going to help you is close to zero, and the chance that seizure surgery could help you is very high.’”

Neurosurgeon Nitin Tandon, MD, is professor and chairman ad interim at the Vivian L. Smith Department of Neurosurgery at McGovern Medical School at The University of Texas Health Science Center at Houston (UTHealth Houston), where he serves as director of the Epilepsy Surgery Program and co-director of the Texas Institute for Restorative Neurotechnologies. He also serves as chief of neurosurgery at Mischer Neuroscience Institute at Memorial Hermann-TMC.

In March 2016, the couple met with Dr. Tandon and his colleague Stephen Thompson, MD, a board-certified clinical neurophysiologist with a specific clinical interest in epilepsy and epilepsy surgery. Dr. Thompson is an assistant professor in the Department of Neurology at McGovern Medical School. Both are members of the Texas Comprehensive Epilepsy Program (TCEP) at UTHealth Neurosciences, a large, comprehensive academic and research-based program that provides the full continuum of neuroscience care.

Shawn underwent a comprehensive evaluation that began with an electroencephalogram (EEG), a test that detects electrical activity in the brain, and video monitoring in the hospital’s epilepsy monitoring unit (EMU). He also underwent a neuropsychological evaluation and MRI.

“Shawn came to us with a history of seizures that had not been responsive to maximal medication treatment,” explains Dr. Tandon. “So we knew he broadly fit into the rubric of medically refractory epilepsy, or medically uncontrollable epilepsy. This is a common diagnosis; about one-third of all epilepsy cases are classified as refractory.”

Dr. Tandon says that some of Shawn’s seizures were really severe, convulsive seizures, and some were less severe, characterized by confusion, lip smacking, and loss of speech and awareness. The latter symptoms fit into the diagnosis of focal onset impaired awareness seizures, also known as complex partial seizures.

Tana came to know Shawn’s seizures and even came up with a way of determining when the more subtle ones were occurring. “I would ask him, ‘What color is the sky?’ And if he was having a seizure, he would answer ‘yes.’ He would listen to direction, but it was like he wasn’t really there,” she recalls.

She says Shawn’s seizures were triggered by anxiety, sleep deprivation, or missing his meds. “If he missed a dose, he would have a seizure within 20 minutes,” she says.

Drs. Thompson and Tandon had several discussions with Shawn and Tana about treatment options and next steps, so that Shawn could decide which treatment option he preferred. “We explained that with the diagnosis of a hippocampal sclerosis, or hippocampal epilepsy, the traditional approach is the anterior temporal lobectomy, which involves removing, or resecting, the damaged portion of the brain. But we also told him that over the last six to seven years we’ve been employing the less invasive laser ablation with excellent results. Shawn chose laser ablation.”

In March 2017, Dr. Tandon performed the procedure at Memorial Hermann-TMC. “When performing this procedure we make a small incision on the back of the head and, using the laser probe, destroy the region of the hippocampus and amygdala causing the seizures,” explains Dr. Tandon. “This is done with great precision. Then the patient is taken to the MRI scanner, where we turn on the laser and concurrently use the scanner to measure the temperature inside the brain. We use that as a way of gauging the extent of ablation that needs to occur.”

Dr. Tandon, working in close collaboration with other UTHealth Neurosciences physicians affiliated with Memorial Hermann-TMC, has performed over 1,000 cranial operations for the treatment of epilepsy. “We are committed to innovation, the use of new technologies and advancing the field,” says Dr. Tandon. “We have been one of the busiest epilepsy surgery programs in the nation for the last 12 to 15 years. There is simply no substitute for experience and skill when it comes to brain surgery.”

Since his surgery, with the exception of one seizure, Shawn has been free of the seizures that plagued him since infancy. He has reduced his medications from 28 pills a day to eight. He is finally able to drive. And the couple have a 1-year-old son.

Dr. Tandon and Shawn both say that there are still a lot of misconceptions surrounding epilepsy. “A lot of people think that epilepsy is disabling and incompatible with a normal, healthy life, incompatible with having a family,” says Dr. Tandon. “And people like Shawn show that this is not so. They have regular lives, jobs, and families. There's an enormous stigma associated with epilepsy that we'd like to help eradicate.”

Need an appointment with an epileptologist? Call (713) 704-7100. For more information, go to the Epilepsy section to learn more.