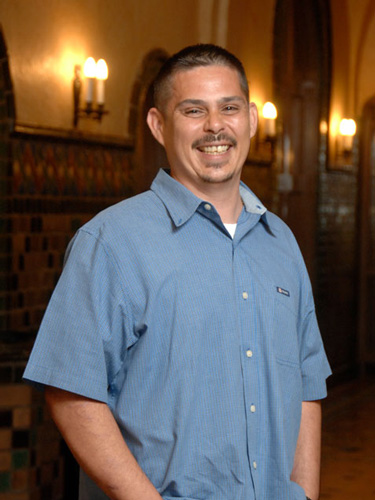 Six months after sustaining multiple traumatic injuries in a motor vehicle crash, 38-year-old Steven Fisher was walking again, thanks to the skill of the multidisciplinary team at the Red Duke Trauma Institute at Memorial Hermann-Texas Medical Center and the handiwork of his orthopedic traumatologist Joshua Gary, MD.

Fisher was about two minutes from his home in Spring, Texas, when a Ford F-250 pickup pulled out of a parking lot in front of his small car. He hit the truck head on and was partially ejected from the vehicle. His right foot, caught under the accelerator, held him in the car.

“I was lucky in one sense,” he says. “An ambulance headed back to the station happened to roll up on the accident scene. They called Memorial Hermann Life Flight® on the spot. Later I heard that the EMTs who found me didn’t expect me to make it.”

Fisher was unconscious on arrival at the Red Duke Trauma Institute. He suffered a brain hemorrhage and severe orthopedic injuries that included a closed right femur fracture, a Grade IIIB open tibial fracture, a hip socket fracture, dislocation of the sacroiliac joint and an open right pantalar dislocation from which the entire talas bone protruded through the skin. During his month-long stay in the ICU at Memorial Hermann-Texas Medical Center, traumatologists performed more than 10 surgeries.

“Steven underwent a large staged orthopedic repair in coordination with plastic and reconstructive surgery and neurosurgery,” says Dr. Gary, an associate professor in the Department of Orthopedic Surgery at McGovern Medical School at The University of Texas Health Science Center at Houston (UTHealth). “A complex case like his requires the effort of our entire team. That access to sub-specialty care and collaboration across all fields of care is what sets the Red Duke Trauma Institute apart from most Level II trauma centers. With each of our trauma patients we think first, save the life, then save the limb, then restore function.”

The musculoskeletal component of Fisher’s injuries alone was severe, with limb-threatening trauma. “At the beginning, we weren’t sure if he would ever be able to walk again,” says Dr. Gary, whose areas of clinical interest include pelvic and acetabular fractures, complex fractures and dislocations, and malunion and nonunion surgery. “Because he was too unstable to undergo definitive orthopedic surgery on arrival, we cleaned the open injuries and placed an external fixator for the tibial plateau fracture and repaired the pelvic and acetabular fractures through small incisions. This removed the urgency to treat his musculoskeletal injuries and allowed time for his other injuries, including his brain, to heal.”

Plastic and reconstructive surgeon Emmanuel Melissinos, MD, was called in on the case to save Fisher’s leg. “We had two areas of concern,” Dr. Melissinos says. “On his upper leg close to the knee, flesh was missing. We had to move muscle around and graft skin to cover it. He also had a terrible ankle injury – a large area with exposed fractures and tendons, damage to the anterior tibial artery and loss of flesh. To cover it, we did a modified radial forearm free flap, using a modification we developed here at Memorial Hermann. When you take that much flesh from the forearm, the patient ends up with a large secondary defect. We’ve modified the free flap so that we can close the donor site without disfigurement.”

Fisher doesn’t recall any of his hospital stay or his first two weeks at home. “Once my wife got to the hospital, she stayed there by my side and never left,” he says. “After I was discharged, we turned the den into a hospital room, and she slept near me on the couch.”

He continues to see Dr. Gary in follow-up. “He’s walking very well,” the orthopedic surgeon says. “On his last visit, he and his wife brought his son, who wanted to thank me for saving his dad.”

Fisher, who with his wife, Ashley Duran, has children ages 12, 9 and 7, believes the prayers and love he received from family members and friends who visited him in the ICU helped speed his recovery. “This has been a very painful and emotional ordeal, and I’m so grateful that Dr. Gary, Dr. Melissinos and all the others care so much about their work and their patients. If it weren’t for them, I wouldn’t be here. After they put me back together, they didn’t expect me to be able to walk for two years. I went to therapy and fought and fought as much as I could and was walking in six months. I have no bad feelings about the accident because there’s so much to be grateful for. The best part is being alive, and being back to being a daddy and husband again.”