Treating a Life-Threatening Brain Injury: From Life Flight to OR Table in Nine Minutes 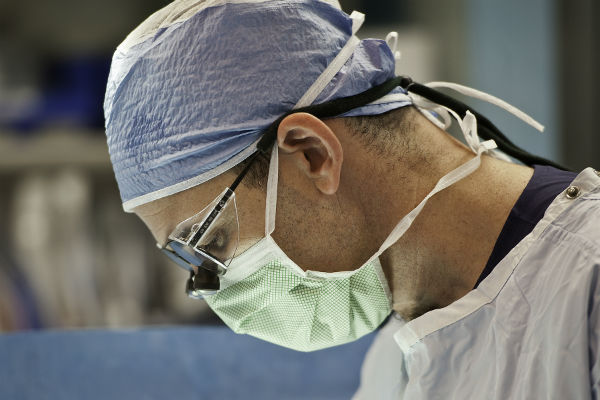 A small bump on the head during a game at his elementary school in Lufkin, Texas – at first Landon Courtney’s injury seemed minor. The seven-year-old was playing four corners in his P.E. class in early March 2016 when his feet got tangled with a classmate’s. He fell to the gym floor fast, striking his head.

When the classmate and a coach helped Landon to his feet, he seemed shaken and a bit unsteady, but otherwise fine.

The school nurse made a precautionary call to his mother, Ellie Courtney, who left work to check on her son. Then in a moment, everything changed. Landon began projectile vomiting and slipping in and out of consciousness. The nurse called Landon’s father, this time with panic in her voice. Mrs. Courtney arrived seconds later.

“The nurse looked at me and said he needs to go to the hospital now,” she recalls. “She sat in the back with Landon, asking him questions to keep him awake, while I drove the two miles to the ER.”

A Turn for the Worse

Stephen Courtney arrived at the hospital a few minutes later. “Despite the turn for the worse, Landon still seemed to be okay,” he says. “The doctor evaluated him, and we initially thought it was just a really bad concussion.”

Emergency staff took Landon to the back for a CT scan. “Once we were back in the exam room, the doctor immediately came in, and his look had changed,” he says.

The couple learned that the injury had caused a large epidural hematoma that required immediate neurosurgery. The closest hospital staffed to perform the procedure was 120 miles away in Houston.

David Sandberg, MD, FAANS, FACS, FAAP, director of pediatric neurosurgery at Children’s Memorial Hermann Hospital, Mischer Neuroscience Institute and McGovern Medical School at UTHealth, had just finished seeing patients in clinic when he got the call from the team at the Memorial Hermann Red Duke Trauma Institute: a seven-year old boy in critical condition was en route to the hospital. Dr. Sandberg was at the Level 1 pediatric trauma center when Landon arrived by air ambulance.

“As soon as I looked at him, one of his pupils started to dilate, indicating he was at risk of death without immediate surgical intervention,” says Dr. Sandberg, who holds the Dr. Marnie Rose Professorship in Pediatric Neurosurgery at UTHealth. “We had to move quickly, which we do as well as or better than any hospital in the country. As a busy pediatric trauma center we’re experienced, with the knowledge and a common sense of purpose that allows us to respond fast without sacrificing safety.”

While the OR was being prepared, Dr. Sandberg called the Courtneys to explain the procedure, its risks and potential outcomes. “We were almost to Humble when he called,” says Mrs. Courtney, who is the early childhood director at Timber Creek Church in Lufkin, where her husband is the pastor.

“He said he needed to operate right away. He couldn’t promise us what the outcome would be. But he was going to do everything he could to get the blood off Landon’s brain quickly. And he asked us for our permission to operate.”

“It was so scary to hear, but we appreciated his honesty,” Pastor Courtney adds. “As we were rushing from Lufkin to Houston, we were praying and crying. And I was reminded as a father that the Lord gives us children to raise, take care of and love, but at that moment I couldn’t do any of that. All I could do was pray for my son.”

Within nine minutes of his arrival at the hospital, Landon was on the operating table with Dr. Sandberg at his side. He performed a craniotomy and saw the clot immediately. “Traumatic brain injuries like Landon’s are not uncommon, and the surgery was straightforward – remove the clot, stop the bleeding, close the skull,” he says.

“Speed is the critical factor. It’s well published that every minute counts with a brain injury. Had Landon arrived at the hospital even an hour later, or if there had been a delay in getting him to the OR, the outcome might have been different. Instead he walked out of the hospital and is doing fine – the most gratifying experience for a pediatric neurosurgeon. Even though we do this day in and day out, I’m always impressed by our teamwork and speed.”

Less than an hour after the Courtneys arrived at Children’s Memorial Hermann Hospital, Dr. Sandberg met with them to share the good news. Landon bounced back quickly after the surgery.

“Within hours of the operation he was able to smile and say, ‘Daddy.’ That’s when I lost it,” Pastor Courtney says. A few days later, Landon was up and around, and in less than a week, he was discharged to home. Within three months, he had completely recovered and was back on his trampoline.

“When I remember the child I saw at the emergency center in Lufkin and see him today, I almost can’t believe it,” Landon’s father says. “We’re forever grateful to Dr. Sandberg and his team for saving our son’s life.”