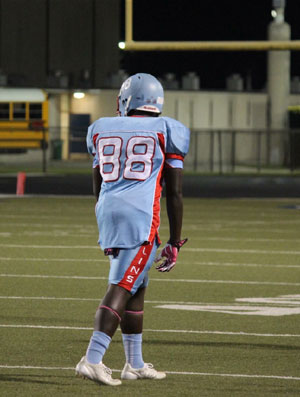 Since he first began playing football at age 5, Treveon, now a high school sophomore, has dreamed of playing college ball, maybe even going pro. But in eighth grade, he was temporarily sidelined, when a routine visit to his pediatrician revealed a hump on his upper back.

X-rays showed a curvature in Treveon’s spine. Suspecting scoliosis, his pediatrician referred him to Shiraz Younas, MD, a pediatric orthopedic surgeon affiliated with Children’s Memorial Hermann Hospital and an assistant professor in the Department of Orthopedic Surgery at McGovern Medical School at UTHealth.

Dr. Younas performed a spinal examination and reviewed Treveon’s X-rays, confirming a diagnosis of adolescent idiopathic scoliosis, or AIS, a musculoskeletal condition characterized by side-to-side curvature of the spine. On an X-ray, those curves resemble an “S” or “C,” rather than a straight line. According to the Scoliosis Research Society, AIS is by far the most common type of scoliosis, affecting as many as 4 in 100 children between the ages of 10 and 18. “Idiopathic” means “of undetermined cause,” and according to the Society, in more than 80 percent of scoliosis cases, a specific cause is not known.

According to Dr. Younas, the severity and treatment of AIS depends upon the degree of curvature in the patient’s spine. A child with a curvature greater than 10 to 15 degrees will typically need regular checkups until he or she has reached puberty and finished growing. A child with a curvature of 20 to 40 degrees who is still growing will typically be fitted with a back brace, to halt or slow progression of the curve. And a child whose curve is more than 45 to 50 degrees may require surgical treatment to prevent progression of the scoliosis past skeletal maturity.

While some medical conditions might require immediate surgery, scoliosis tends to change slowly. “One thing that perhaps sets our team apart,” says Dr. Younas, “is that we encourage patients, after receiving a diagnosis, to take their time to understand what scoliosis is and what the treatment options are. We empower them with education and information.”

Dr. Younas and his team spend a lot of time with patients and their families, sometimes over multiple visits, to make sure they understand the diagnosis and are prepared to embark on their treatment plan. They also provide them with additional trustworthy sources of information, such as the Scoliosis Research Society and the Children’s Memorial Hermann Hospital pediatric orthopedic webpage.

The pediatric orthopedic team worked with Treveon’s family prior to his surgery, to help them feel more prepared and less anxious. Before being admitted, they met with various members of the surgery team, including the anesthesiologist, nurse, physical therapist and surgeon, and were given a tour of the hospital by the Child Life team, to let them become familiar with the environment. This preparation allowed them to be less anxious before and after the surgery and helped them focus on Treveon’s recovery and rehabilitation after his surgery.

In December 2014, with his mother at his side, Treveon was admitted to Children’s Memorial Hermann Hospital, where Dr. Younas and his team, including affiliated pediatric surgeon Lindsay Crawford, M.D., performed the six-hour procedure, inserting two rods and multiple screws to straighten Treveon’s back. The procedure focused on correcting all planes of deformity while closely monitoring the spinal cord function. The procedure went well, and three days later, Treveon was walking without assistance. On the fifth day after surgery, he was discharged to go home.

Asked what he might tell a friend who has been diagnosed with scoliosis, Treveon replies, “I would tell them who to go to – Dr. Younas. He was cool. And I would tell them not to worry; there’s nothing to be scared of.”

Treveon was restricted to low-impact sports and activities for the first six months after surgery. Now he’s back on the field and has his eye on the future – Ole Miss and TCU are his current favorite colleges. And who knows? Maybe someday he’ll follow in the footsteps of his favorite NFL player, Tom Brady of the New England Patriots.