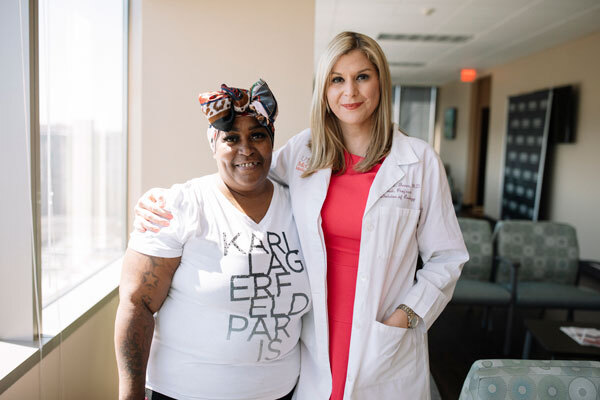 “I thought cancer skipped a generation.”
These are the words Vernita Eddins spoke when she received her breast cancer diagnosis.

Vernita is certainly no stranger to cancer – there is a strong family history, as her mother died from breast cancer at age 50, and one of her daughters was diagnosed at 27.

Her daughter urged her to make an appointment to see Jessica Treviño Jones, MD, breast oncologist and assistant professor of oncology at McGovern Medical School at UTHealth Houston, who is affiliated with Memorial Hermann, and is the same doctor that treated her two years ago for stage III breast cancer during the pandemic. But, another problem was that Vernita didn’t have medical insurance.

“She came to me after having an irregular breast mass biopsied,” Dr. Jones said. “Although she did not have insurance, she knew that our cancer center had the resources to help her. Our social worker and nurse navigators worked with her to establish care, and helped facilitate her insurance enrollment.”

Vernita originally knew something was wrong when she began feeling a shortness of breath just from walking around, accompanied by a severe pain in her breast that wouldn’t go away.

“My body was telling me something was wrong,” she said. “I would typically work 13-hour shifts on my feet at my job, but I couldn’t do it anymore. I would feel a shortness of breath just walking to the bathroom, and my breast felt like it was burning from the inside out.”

This prompted her to do the BRCA gene blood test to see if she carried a gene that places her at increased risk for developing breast cancer. Her result was positive.

“While it’s more common for a daughter to get cancer if her mother gets cancer, the BRCA gene that her daughter was born with had to have come from her mother since her father’s side didn't have any history of cancer,” Dr. Jones said. “Therefore, even though Vernita was in her 50s, she still had a higher risk of breast cancer than other women her age.”

While Vernita did not have her first mammogram until age 49, she was always diligent about doing her self-breast exams. Then, at age 50, she felt a lump and was later diagnosed with stage III triple negative breast cancer, the most aggressive of curable breast cancers.

“Although this is a fast-growing cancer, new advances in treatment including immunotherapy have improved patients’ chances of remaining cancer-free and living long lives,” Dr. Jones said. “The blessing in disguise was that I had already cared for her 28-year-old daughter, now a two-year breast cancer survivor from stage III triple negative breast cancer,” Jones said. “Vernita already felt like family, and now she was trusting me to get her through this.”

According to the American Cancer Society, 1 in 8 women will develop breast cancer sometime in their lifetime. However, mammograms, when done regularly, have the ability to detect cancer in its earliest stages where the cure rate is greater than 90 percent. Physicians can also predict which women are more likely to become the 1 out of 8.

“While we cannot control our genetic makeup or risk of cancer due to a family history, we can empower ourselves to detect cancer at its earliest stage. Our goal is to stop breast cancer before it even starts!” Dr. Jones said.

And, that’s exactly what she intends to do. In partnership with UTHealth Houston, Dr. Jones also leads the Breast Cancer Prevention Program at Memorial Hermann, a program dedicated to caring for women who are at high risk for developing breast cancer. The program offers individualized assessment, care planning and education to help patients understand their risk for developing breast cancer. A team of affiliated physicians, nurses, nutritionists, genetic counselors and breast care nurse navigators work together to design a personalized care plan based on individual risk. Many women with a history of breast cancer start their journeys here to help doctors understand the best plan of action.

This month, Vernita will start her first round of 12 rounds of chemo. She knows there is a tough road ahead, but her family motivates her – particularly her 5-year-old grandson, the only boy of her nine grandchildren, whom she is also raising.

“I have to fight for my family,” Vernita said. “I want to grow old. I want to live to have gray hair. I want to see my children all grow up and have children and get married. And, I want to continue to see my grandson running around in a different superhero costume every day – but now it’s time for me to be his superhero.”