Pediatric Transposition of the Great Arteries

The normal heart has four chambers: two upper chambers called atria, which receive blood into the heart, and two lower chambers called ventricles, which pump blood out of the heart. Ordinarily, unoxygenated (blue) blood comes back from the body into the right atrium, moves into the right ventricle, and then is pumped out of the right ventricle through the pulmonary artery (the main artery to the lungs) to collect more oxygen. The now-oxygenated (red) blood returns from the lungs and enters the left atrium, moves into the left ventricle, and then is pumped out to the body through the aorta (the body’s main artery).

Often, TGA is accompanied by other heart defects, which actually may help infants survive until prompt treatment. These defects include a hole between the heart’s upper chambers (atria), known as an atrial septal defect, or lower chambers (ventricles), known as a ventricular septal defect. Both defects allow blood to mix, enabling some oxygenated blood to get to the body and some unoxygenated blood to get to the lungs. The size of the hole in the heart is sometimes inadequate and needs to be enlarged in newborns by a specially trained cardiologist.

Also boosting oxygen is often an extra blood vessel – patent ductus arteriosus – that joins the heart’s aorta (main artery) and the lung’s pulmonary artery in the womb but usually closes soon after birth, when the infant can breathe air on his or her own.

What Are the Causes?

TGA is a congenital heart defect that occurs as the heart develops during the first eight weeks of pregnancy. In most children, the problem occurs spontaneously, without a known cause. Genes may rarely contribute: If you have a child with a congenital cardiac defect, the chance of having another child with a heart defect is about two to three percent. Mothers with Type 1 diabetes also have a slightly higher risk of having babies with TGA. Three of five infants with TGA are boys.

What Are the Symptoms?

Shortly after birth – usually within a week, and at most one month later - a newborn with TGA develops a bluish tint to lips, nails and skin (due to lack of oxygen), as well as rapid or labored breathing, cold, clammy skin, a weak pulse, a pounding heart or a heart murmur – or whooshing sound – heard via stethoscope.

How Is It Diagnosed?

TGA may be diagnosed during pregnancy with a fetal echocardiogram, which is a specialized ultrasound of the fetal heart. The affiliated physicians in the Fetal Cardiology Program at The Fetal Center will confirm a diagnosis and prepare a delivery plan for both mom and baby. A multidisciplinary team of specialists will also develop the baby's immediate care plan following delivery.

If TGA is not diagnosed in utero, and suspicion of a heart defect occurs after the baby is born, a pediatrician will refer the patient to a pediatric cardiologist or neonatologist to determine the diagnosis. The most common tests are: 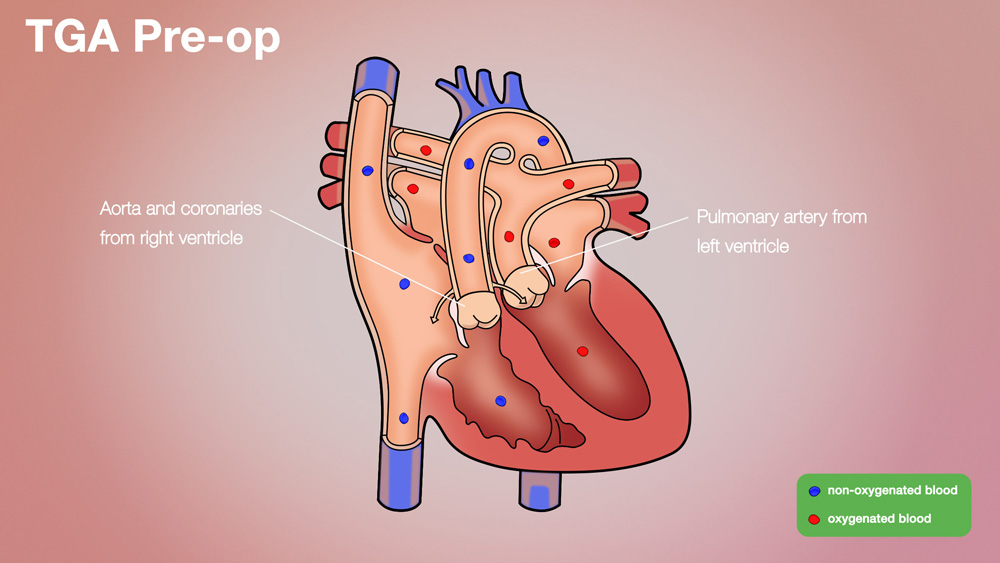 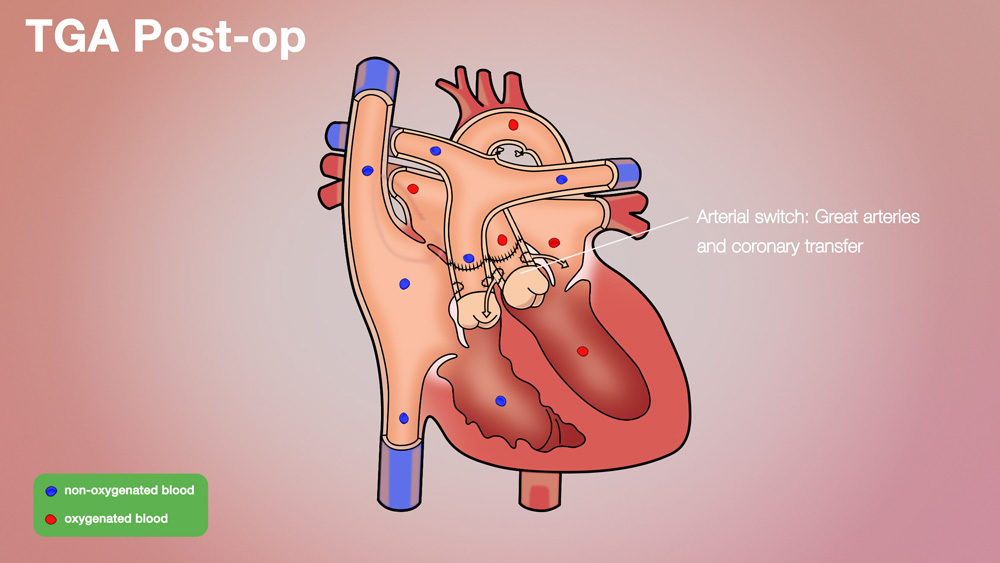 How Is It Treated?

All children with TGA need surgery called an arterial switch procedure to correct the defect. Prior to surgery, the infant must be stabilized in a way that allows for the red and blue blood to mix. Most babies are started on a medication called prostaglandin (PGE1). This agent is delivered through an IV, keeping the ductus arteriosus (PDA) open. Some babies will also require a balloon atrial septostomy, a procedure in which a balloon, inserted through a vein in the groin or belly button, is used to enlarge a small hole between the upper chambers of the heart. This also allows for better mixing of red and blue blood.

Surgery for TGA is usually done within the first two weeks of life. Even though most children do very well with the operation, it still represents major open heart surgery on a newborn. Most babies will spend several days in the intensive care unit after surgery and many will spend longer. The majority of babies will spend an additional 1-3 three weeks in the hospital.

After surgery, the child may need medication to help his or her heart pump efficiently and control heartbeat and blood pressure while limiting excess fluid in the body. Rarely, a pacemaker may be needed to help the heart beat normally.

What Are the Long-Term Effects?

For most children with TGA, the prognosis is excellent. If an arterial switch is successful, there is a good chance that a child may be expected to live an entirely normal life, both in terms of longevity and activity level. However, it cannot be overstated that in TGA there is often a great deal of difference between individual patients. One must keep these differences in mind when evaluating children.

What Follow-Up Care Is Needed?

Parents will help with wound care as the baby heals post-surgery. The child’s cardiologist will monitor for leaky valves, irregular heartbeat, narrowed blood vessels at surgical sites or other heart issues that may arise later in life.