When a typical evening turned into a life-threatening situation for the Guice family of Atascosita, first responders, Memorial Hermann Life Flight® and the Memorial Hermann trauma team made every minute count. 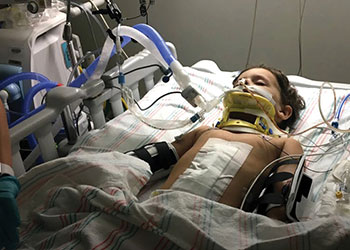 There was nothing unusual about the evening. Liz Guice was getting her one-year-old daughter ready for bed. Tyler was giving their three-year-old twin boys their bath. In the few seconds it took for him to step into the hall for towels and pajamas, Gray began screaming. Tyler ran back into the bathroom to find his son standing in the middle of the floor, blood streaming out of a wound his father said looked like a bullet hole.

Gray had slipped and fallen getting out of the tub. A broken shard from a ceramic trash can had punctured his back. Tyler wrapped Gray in a towel and laid him down on the sofa. Liz called 911. Gray passed out.

“A nurse who lives across the street came over and told us to keep pressure on the wound and try to keep him awake,” Tyler said. “But he was crashing, losing so much blood. My shirt was soaked through.”

The 911 operator dispatched an engine crew from Houston Fire Department station 105. After a quick assessment, captain D.J. Yarbrough called Life Flight and the fire company’s medics. The Life Flight crew was already in the air and quickly flew to the scene. With no time to set up a landing zone, the pilot set the helicopter down in an intersection two blocks away from the Guice’s house. Meanwhile, HFD paramedics Stacey Lejarza and Gracie Olivares stabilized Gray. “He was still responsive, but we could tell he was compensating,” said Oliveras. “He was losing a lot of blood and going into shock.”

Neither flight paramedic Brandon Crackel nor the rest of the crew had any specific information about Gray’s injury before landing, but they could immediately see he was in serious trouble. His breathing was shallow and slow. They couldn’t get a pulse. As soon as they were back in the air, Crackel started an IV, inserted a breathing tube and gave him blood. “We knew we had to get him to Memorial Hermann before he went into cardiac arrest,” Crackel said. “We made it in six minutes. If we had not already been in the air, or if we had not had blood products on the aircraft, he probably wouldn’t have made it.”

Quick action in the ED

Dr. Tsao said, “The piece of pottery, shaped almost like a knife, had penetrated his back, severing the artery and vein that went to his right kidney. The kidney was basically severed. He was bleeding out from it. So, we removed it.”

Dr. Tsao went on to say that the Memorial Hermann trauma system was instrumental in saving the boy’s life. “We’re set up to quickly triage and treat multiple trauma patients simultaneously. The speed with which we can stabilize and treat a patient, coupled with Life Flight’s ability to administer blood before a patient arrives at the hospital, likely made the difference in this case. After only six days in the hospital, the patient was released to go home, quickly recovered and is doing well.”

Dr. Taub concurred. “We have the best trauma system and one of the biggest Level I trauma programs in the country,” he said.

“We treat over 8,000 trauma patients every year. In Gray’s case, everyone – the ground crew, the Life Flight crew, the ER and OR nurses and staff – worked together efficiently and effectively to save this boy’s life.”

Winning the race against time

Clearly a lot of things had to fall into place for Gray’s story to be a successful one, and every emergency situation is unique. But Gray’s parents particularly appreciate how everyone involved responded when there was no time to spare. They believe both medical and divine intervention saved their son’s life. “It seemed unreal, like a made-up story,” Liz, his mother, says. “But we knew Gray was in the best hospital on Planet Earth. A lot of people worked hard. They all showed tremendous compassion.”

Back to being Gray

His father, Tyler, reports that Gray is doing remarkably well six months after the June accident. “In fact,” he says, “we think he is thriving. And he loves to show off his scars.” Both parents describe Gray as a joyful little boy who loves playing superheroes with his twin brother and taking care of his little sister. Tyler adds, “He loves going to school and church and never meets a stranger.”

We knew we had to get him to Memorial Hermann before he went into cardiac arrest. We made it in six minutes. If we had not already been in the air, or if we had not had blood products on the aircraft, he probably wouldn’t have made it.