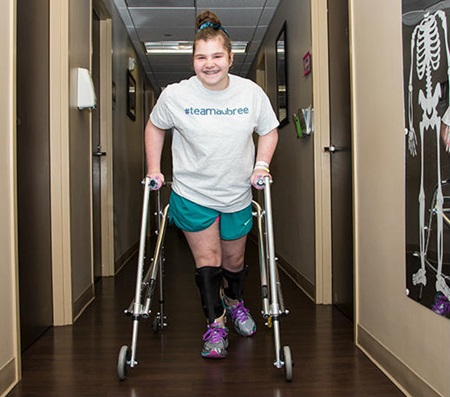 Aubree Ford is a busy 13-year-old. She loves dancing, horseback riding and swimming. She loves to hang out with her friends. She likes to read and listen to music. One of her favorite pastimes is to watch the twin YouTubers, Brooklyn & Bailey.

But Aubree also has big plans for her future, and everyone who makes up Team Aubree – her family and friends, the Texas Comprehensive Spasticity Center at UT Physicians, Children’s Memorial Hermann Hospital and Shriners Hospitals for Children – is on the journey with her.

Aubree was diagnosed as a baby with spastic triplegic cerebral palsy. In her case, both her legs and her left arm had spasticity – a condition that made her affected limbs rigid and stiff. Because of the spasticity, Aubree has had physical therapy since she was a baby to help manage it. She has needed assistance to help with her mobility and has used a pediatric walker since she was 4.

“Walking on my own has always been my goal,” Aubree says. “Now, because I don’t have the spasticity, I have a much greater chance of that happening.”

Spasticity is commonly found in children with cerebral palsy, a neurological disorder that causes problems with movement, balance and abnormal muscle tone and stiffness.

Manish N. Shah, MD, a pediatric neurosurgeon with UT Physicians and director of the Texas Comprehensive Spasticity Center, tells families that cerebral palsy is not an all or nothing disorder.

“A lot of families are really freaked out by the diagnosis because when they hear the words cerebral palsy, they don’t realize it’s an umbrella term,” says Dr. Shah, assistant professor of pediatric neurosurgery at McGovern Medical School at The University of Texas Health Science Center at Houston (UTHealth). “They think you’re just permanently disabled. I think the biggest point of our center is there are many things we can do for children with various forms of cerebral palsy to greatly improve their quality of life, and Aubree is a great example of that.”

The players behind Team Aubree 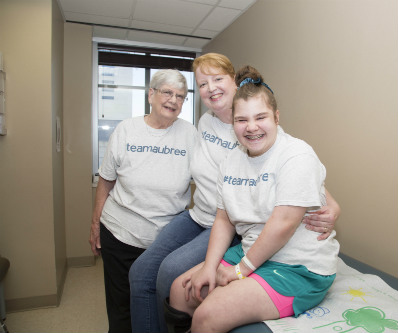 Aubree’s parents are major players on Team Aubree. They’ve always made sure Aubree has not been defined by her diagnosis.

“We’ve never used her diagnosis as an excuse,” says Wendy Ford, Aubree’s mother. As an example, Ford adds that after they read the popular children’s book, Angelina Ballerina, Aubree wanted to try dance. “So, we started dance class,” she says.

Aubree’s dad and I really did work very hard to not let her spasticity impact her life,” Ford continues. “We never told her you can’t do something.”

According to Dr. Shah, 70 percent of children with cerebral palsy have spasticity. “If their spasticity is treated in a meaningful fashion, they can have substantial gains in quality of life. Some of them can even go from being in a wheelchair to being independent ambulators or walking with some minimal assistance, like with ankle braces,” Dr. Shah says.

Spasticity associated with cerebral palsy occurs as a result of a brain hemorrhage most commonly found in children born prematurely or at birth.

“The hemorrhage in their heads hurts part of the adjacent brain next to fluid-filled chambers, and the fibers that are going through this part of the brain are very important in the volitional control of movement,” Dr. Shah explains. “That means they are the primary cells in the brain that initiate movement. When this hemorrhage happens, these cells die or are affected adversely.”

As a result, the signals from the brain down to the spinal cord do not transmit information effectively.

Normally, one muscle is supposed to stretch out when the other muscle is contracting, but when someone has spasticity, both muscles continually contract against one another, a feedback loop enabled by an abnormal, hyperactive stretch reflex, Dr. Shah explains. 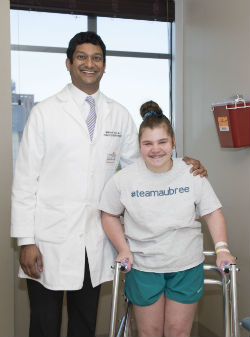 However, thanks to a specialized surgery called selective dorsal rhizotomy, patients like Aubree, can experience a permanent removal of the spasticity from their legs.

“Dr. Shah trained as a resident and fellow for a total of eight years with one of the pioneers of the surgery, Dr. T.S. Park, at St. Louis Children’s Hospital,” says Christy Hill, a physical therapist at the UT Physicians Pediatric Surgery clinic and coordinator of the Texas Comprehensive Spasticity Center. “There are only a handful of surgeons who are fellowship-trained by Dr. Park in this minimally-invasive one level laminectomy SDR procedure in the world. Normally, this surgery is performed on patients between 3 and 9 years old ideally, but Dr. Shah does see patients up through the age of 40 for this procedure.”

To determine if patients are candidates for selective dorsal rhizotomy, they first meet with the center’s multidisciplinary team of experts. The center is designed to be a “one-stop shop” for patients and families.

“Normally, patients have to go see the doctors at different locations at separate times,” Hill says. “A lot of times, you don’t get the communication between the physicians. Our clinic is a little different. All the doctors go in to see the patient together and do their assessment. They conference and then they go back in and talk to the patient and give their recommendations.”

While Aubree’s family felt they could continue to make progress therapeutically, they noticed as she got older, her spasticity began interfering with her daily life and activities.

“We learned that as I got older, it progressed,” Aubree says. “I got tighter and tighter in my legs as time went on. It really affected me in the sense of being able to do things.”

Ford says she saw the effects of spasticity show more once Aubree hit puberty. “We saw a pretty significant decline in her ability to ambulate,” she says, adding that it became harder for Aubree to use her walker to get around. “In the winter of last January, she was actually fitted for her first wheelchair. It was too hard for her to walk. She was too stiff. Her legs were too stiff.

“I knew at the rate we were going if we didn’t do something that Aubree would not maintain her independent ambulation for very much longer,” Ford continues. “This was the one shot we had not tried to give her as much functional independence as she could have.”

While the Fords were clear that selective dorsal rhizotomy was a last resort option for Aubree, they knew their daughter was in excellent care once they met Dr. Shah.

“I think Dr. Shah is amazing,” Ford says. “He didn’t just look at Aubree, the diagnosis. He looked at the child, and he looked at how hard she has worked her whole life and how hard we’ve worked. He knew we would put in the work afterwards, and he knew how determined she was.”

On June 11, 2018, Dr. Shah performed selective dorsal rhizotomy on Aubree. Everyone wore “Team Aubree” T-shirts the day of the surgery.

“Selective dorsal rhizotomy is a minimally invasive surgery that is performed in the middle of the back around the bottom portion of the spinal cord in which we cut 75 percent of the nerve roots that are contributing most to the spasticity,” Dr. Shah says, adding that they use special testing in the operating room to determine which nerve roots carry the most spasticity. “There’s a permanent removal of spasticity in the correctly selected patient. Surgery takes about three hours, and it’s only done in a handful of centers around the country.”

After the surgery, Ford saw immediate change in Aubree’s legs, which used to be tight and rigid. “It was amazing to see how loose her legs were,” Ford says.

“I’m so glad I did this surgery,” Aubree adds. “There were a lot of things with my arms and with my legs that I couldn’t do before the surgery or I couldn’t do as well, and now, I can.”

What’s interesting about selective dorsal rhizotomy is that patients also have great improvements in their arm function.

“The day after surgery, my mom had me lift my arms up just to see how it improved, and the change was miraculous,” Aubree says. “It was really amazing that I was lucky enough to have my left arm change.”

While it’s wonderful to have the spasticity gone and to see some immediate improvements, there is a long road of recovery ahead for patients. Many require at least 12 to 18 months of intensive rehabilitation and physical therapy to learn how to use their muscles again and to allow their muscles to strengthen.

The road to rehab

After her hospital stay, Aubree was transferred to Shriners Hospitals for Children to begin an intensive inpatient rehabilitation program.

“We have an excellent partnership, and we’re able to offer a very unique four to six week post-operative rehabilitation service through Shriners where the children are very active all day,” Dr. Shah says. “Kids who go to Shriners are much, much farther along.”

Aubree set a personal goal for herself – to walk out on her own two feet.

Aubree had her three-month follow up with Dr. Shah in September. “We’re very proud of how hard she’s worked, and we know she’s going to keep working hard,” he says. “We’re all very proud of how Aubree is doing.”

Ford sees changes in her daughter every day because of the surgery. “Her handwriting is amazing,” she says. “Her trunk control is so much better. Her sitting balance is so much better. She used to use her arms a lot to try to get her balance when she was sitting. She doesn’t do that anymore.

“Before, the spasticity just got in the way, and you could not strengthen the muscles that needed to be strengthened for her to be able to walk independently,” Ford continues. “With that gone, she’s got a chance.”

Aubree is determined to keep working toward her dream to walk on her own, and with the help of Team Aubree, she knows she has the support to get there.