Sixteen-year-old Hannah Hendricks not only has grit, she runs on it. An aspiring athlete with a passion for competitive running, Hannah has always shown determination and resolve. But when faced with the biggest setback of her life, she showed her grit to be the kind that comes from deep inside, the kind that keeps you going against the odds. And Hannah knows all about beating the odds.

On the morning of July 25, 2013, Hannah, an incoming high school freshman, was out on a training run with a group of friends who were preparing for the upcoming season on the Pearland cross-country team. A car – by best estimates, going 40 miles an hour – struck her, inflicting serious injuries on the avid runner.

Hannah was flown to the Level I Trauma Center at Children’s Memorial Hermann Hospital by a Life Flight® crew from the Children’s Transport Team, which serves critically ill or injured pediatric patients by providing immediate, specialized care during transport. Because she was awake enough to share her mother’s cell phone number, one of the medical staff members called Eileen Hendricks en route to tell her about the accident and secure preliminary permissions that would allow Hannah’s care to proceed without delay.

Once Life Flight landed, a multidisciplinary pediatric trauma surgical team of general and orthopedic surgeons and neurosurgeons assessed Hannah’s injuries, stabilized her and began the process of administering care. She had internal bleeding on her brain; a fractured L5 vertebra in her spine; a broken pelvis, left leg and left knee; a severe wound to her right thigh as well as wounds to her left thigh; and three torn ligaments in her right knee.

Hannah’s mother remembers the “amazing teamwork” by the Children’s Memorial Hermann emergency team during those first few agonizing hours. “From the time Hannah was transported,” Eileen says, “she was treated as a priority. Everything fell into place and was perfectly managed. The ‘captain’ of the trauma surgery team kept us up-to-date about everything.”

Hannah’s first hospital stay lasted three weeks. During that time, so many of her friends visited –bringing balloons and filling her room with flowers – that the floor staff took on the role of unofficial “crowd control.” The nurses treated her to a spa day when they did her hair and polished her nails. “I found out that more people cared about me than I thought – the whole community, not just my family,” Hannah recalls.

When she left Children’s Memorial Hermann, Hannah had to trade her running shoes in for a wheelchair – the “worst part” of the recovery, she says. Dr. Alfred Mansour, a dual fellowship-trained sports medicine and pediatric orthopedic surgeon, took over primary responsibility for her care. The two of them shared one major thing in common: an intense desire to get her back to competitive running. 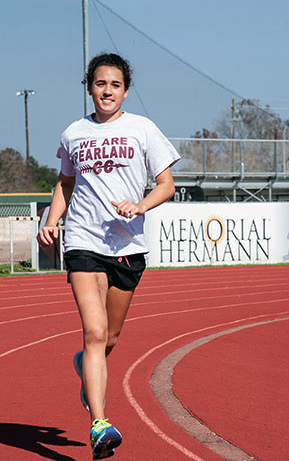 It was going to take time and patience, something Hannah admits was hard to muster in those wheelchair days. Reconstruction and rehab had to wait for her initial surgeries to heal, including a series that gradually closed the critical wound on her right thigh without tissue grafts.

During that time, her pelvis and posterior cruciate ligament (PCL) – one of the damaged ligaments within the knee – had healed without surgery. The next step was an osteotomy to cut and realign the bone in her right leg, followed by a procedure to correct the remaining damaged ligaments. Dr. Mansour performed the osteotomy in December 2013, five months after the accident. In May 2014, he reconstructed the medial collateral ligament (MCL) and used tissue from her left knee to reconstruct the anterior cruciate ligament (ACL).

Dr. Mansour describes Hannah as “a trooper” and “a warrior.” “She spent hours in rehab, doing everything that was asked of her. She had her ups and downs, but never expressed any hopelessness. Her own determination and a very supportive family made the difference,” he recalls.

That supportive family includes not only her mother, but also her dad, David; her older brother, Ryan, who was entering his senior year of high school at the time of Hannah’s accident; and her twin brother, Noah, a basketball player who, inspired by his sister, took up cross-country himself.

Hannah never doubted that she’d run again, but her first opportunity took her by surprise. During rehab, she’d been warned not to get impatient, not even to try jogging. The day the physical therapist pointed down a long hallway and told her to “go for it,” her face, according to her mother, “lit up. She was so excited to be able to run again.” It was exactly the same look Eileen remembers when her daughter got out of the hated wheelchair for the first time about ten months earlier.

Two and a half years and 10 surgeries later, Hannah, now a junior, runs with a brace for extra support, but run she does. She’s completed a season on the junior varsity cross-country team, winning several medals along the way.

During her recovery, her high school sponsored two benefit runs on her behalf – the Hannah Hendricks GRIT Run – a “mudder” that she walked in November 2013, but ran in March 2015. Perhaps the greatest testament to her strength of spirit and ability to inspire: the Pearland High Cross-Country team now presents the annual “Hannah Hendricks GRIT Award” to the team member who’s displayed the most determination during the year.

Having used that grit to overcome obstacles that most 16-year-olds cannot imagine, Hannah has new goals. The most immediate: to complete a half marathon. Next: a full marathon, most likely in 2017. Along the way: to recover her old running times. And ultimately: to pay it all forward. Hannah had originally intended to become a veterinarian, but she’s shifted her focus to becoming a physical therapist. “I’ve lived it firsthand. If I can help inspire someone to get through an ordeal, I want to help.”