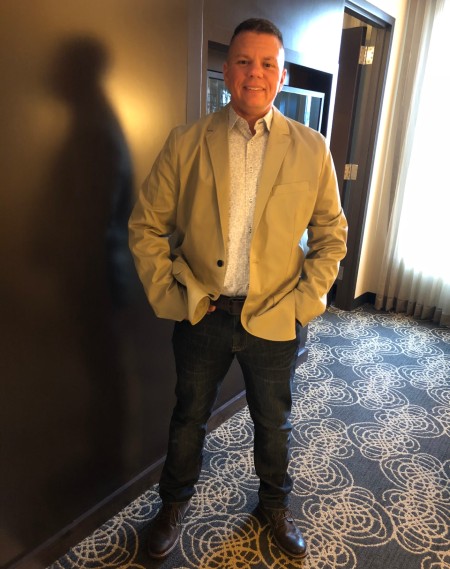 It’s something most people take for granted: the ability to just be who you are in public. But for Darryn Hurt, it was a constant struggle. Knowing he was born in the wrong body, Darryn never felt like he fit in.

After five years of testosterone therapy and 12 months of psychological counseling, Darryn, who was assigned female at birth, took the final step in his transition journey with an anterolateral thigh flap (ALT) phalloplasty surgical procedure. “I was ready to see myself on the outside as I felt on the inside,” he said.

The gender-affirming procedure utilized skin, tissue and nerves from Darryn’s own thigh and crafted them into male genitalia. Phalloplasty is one of several masculinizing procedures Darryn underwent during his surgical transition that lasted nearly 24 hours.

Darryn, 43, a federal police officer, says the decision to have gender-affirming surgery was an emotional one, but he was ready. He began a thorough search of surgeons and health systems, and placed his trust Daniel J. Freet, MD, renowned Memorial Hermann-affiliated facial plastic and reconstructive surgeon and associate professor at McGovern Medical School at The University of Texas Health Science Center at Houston (UTHealth).

“I looked at surgeons in Florida, California and New York, but Dr. Freet was the best fit,” Darryn said. “When I had my first appointment with him, I just knew he was the one. He’s a great surgeon, and I also like his personality and sense of humor.”

Through an in-depth consultation process, Darryn and Dr. Freet worked together and discussed different masculinization surgical options. The goal was to choose the procedure that would work best with his specific anatomy to create the best possible outcome. They decided on ALT phalloplasty.

Along with his wife, Kayley, and daughter, Jayden, Darryn traveled from Moody, Alabama to Houston to start the process of aligning his physical being with his true gender identity. The multi-disciplinary surgical process began with pre-operative appointments with Dr. Freet and also with a urologist and gynecologist.

Surgery day started with a vaginectomy and oophorectomy to remove female reproductive organs and genitalia, followed by skin grafts and the ALT phalloplasty procedure. After the lengthy surgery, Darryn stayed in Houston for a month for post-operative appointments and to work with a physical therapist to learn to use a walker while his leg recovered.

“It’s a complex surgery, but Darryn was a great candidate and he was eager to move forward,” said Dr. Freet. “We took into account Darryn’s physical health and anatomy, and determined the ALT phalloplasty was the best option to help him achieve what he was looking for. The procedure gave him a natural-looking, functional result that is integral to his transition.”

Six months after surgery, Darryn is well on his way to being back to his everyday life. “I’m still on light duty at work, but I’m working on being fully back to my normal duties as an officer, like patrolling, physical fitness tests, and weapons qualifications tests.”

Since completing his transition journey, Darryn is finally able to look in the mirror and see the person he knows he is. “Even though I had hormone therapy, before surgery people would call me ‘ma’am.’ Now nobody even questions it, and I feel more confident in myself as a man,” he said. “I haven’t been misgendered at all. The surgery improved everything for me.”

For more information on our Gender-Affirmation Surgical Program or to schedule an appointment, please fill out the form below or call (832) 325-7181.

Thank you for contacting our Gender-Affirmation Surgical Program. We have received your inquiry, and a team member will contact you soon.