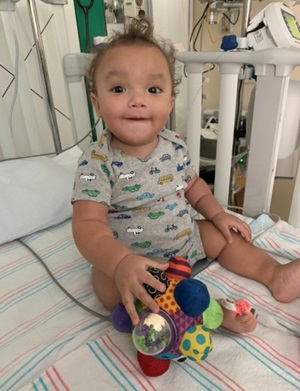 In April 2020, Keisha Howell and David Hackworth got the call they’d been waiting for. “It was about 11 o’clock at night, and a nurse from the Transplant Center called and said, ‘We have a match for Derek.’ I packed up Derek and headed straight there,” says Keisha.

Four months earlier, Keisha and David’s son, Derek, then 14 months old, had been put on the transplant list. The “match” was a kidney from a deceased donor. The call, from the Transplant Center at Memorial Hermann-Texas Medical Center, was a major milestone in a journey that began even before Derek was born.

During Keisha’s pregnancy, an ultrasound showed that the baby she was carrying had a congenital condition called posterior urethral valve (PUV), a form of lower urinary tract obstruction (LUTO), which caused his urine to flow backwards—to “reflux”—back into his kidneys. From that point on in her pregnancy, Keisha saw a high-risk pregnancy doctor, called a maternal-fetal medicine doctor, initially every week then every 3 days until her baby was born.

At 32 weeks, the decision was made to induce delivery, and Keisha’s and David’s son Derek was born. He was immediately transferred to Children’s Memorial Hermann Hospital in the Texas Medical Center, where he was placed in the hospital’s neonatal intensive care unit (NICU).

When Derek was 3 days old, doctors performed a valve ablation to try to open up the obstruction. But based on the outcome, doctors explained to Keisha and David that Derek would likely require dialysis and eventually a kidney transplant.

For the next several months, the goal was to prepare Derek for his kidney transplant. “To ensure the child’s safety and improve transplant outcomes, a kidney recipient should be at least 10 kilograms (about 22 pounds) in weight before transplant,” explains affiliated surgeon J. Steve Bynon, MD, professor and director of immunology and organ transplantation at McGovern Medical School at The University of Texas Health Science Center at Houston (UTHealth) and chief of abdominal transplantation at Memorial Hermann-TMC. Dr. Bynon would ultimately perform Derek’s transplant surgery.

“Most of these kids get adult kidneys, and the adult kidney is going to be the size of your fist, or a little bit bigger. So space sometimes is an issue, and that's where the 10 kilograms is really key to make that safe for the kids,” says Dr. Bynon. 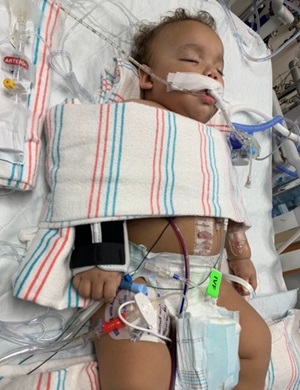 A nephrologist monitored Derek’s renal (kidney) function, while a nutritionist worked to ensure Derek was getting enough nutrition for optimal growth. To compound matters, Derek wasn’t a good eater, so a gastronomy tube, also known as a G-tube, was inserted into his belly through which he received nutrition and medications. “After the G-tube,” says Keisha, “it was smooth sailing.”

In January 2020, Derek was placed on the transplant list for a donor kidney. “A lot of people asked me why we—Derek’s father and I—weren’t going to donate one of our kidneys to him,” says Keisha. “And that was our initial thought. But Dr. Bynon explained to us that Derek would likely need multiple transplants during his lifetime, and I thought it would be better to save ours for those later transplants.”

Derek was referred to the Transplant Center, where he was cared for by a multidisciplinary team of specialists. Keisha initially met with the Transplant Center’s pediatric abdominal transplant coordinator, Sarah Arldt, who educated her about the entire transplant process, including Derek’s pre-evaluation, registering for and receiving the donor kidney, the actual transplant surgery, post-operative care and lifelong management. Arldt was also instrumental in securing insurance pre-approvals, scheduling Derek’s pre- and post-operative appointments and answering the family’s questions.

The Center’s social worker, Denetrius “Dee” Hunter, provided emotional support and helped Keisha locate financial assistance for everything from Derek’s medications and special formula to reimbursement for gas and mileage to and from the hospital.

In spring 2020, Derek’s kidneys were failing. The decision was made to initiate dialysis while Derek awaited his transplant. Surgery was scheduled to implant a dialysis port, but then COVID-19 hit, and hospitals were forced to cancel non-emergent surgeries. Fortunately, right about that time, Keisha and David got the call that a suitable donor kidney was available.

On April 18, 2020, when Derek was 16 months old, Dr. Bynon performed the transplant surgery at Children’s Memorial Hermann Hospital, successfully replacing both of Derek’s diseased kidneys with a kidney from a deceased donor. “The hospital staff was great about keeping us informed throughout the surgery,” says Keisha.

Derek was immediately placed in the hospital’s pediatric intensive care unit (PICU), where he received ‘round-the-clock care by a team of specialized transplant nurses, nephrologists and other members of the transplant team.

As affiliated pediatric nephrologist Rita Swinford, MD, associate professor and director of nephrology at McGovern Medical School at UTHealth, explains, pediatric transplant patient care requires a highly integrated, multidisciplinary approach. “We’re monitoring the health and performance of the donor kidney in terms of protein excretion, electrolyte balance, etc. We're monitoring blood pressures to make sure they're in line. We're monitoring urine output and bladder function in terms of the bladder being able to hold urine, to see if we need to catheterize. We’re integrating with the pharmacy, the dietitian-, the transplant coordinator and the social worker. We still have to make sure that we're looking at nutrition, either too much or too little. And if subspecialists are involved, we’re coordinating that care,” she says.

Initially following Derek’s discharge from the hospital, Dr. Swinford and others from the team saw Derek three times a week for clinic appointments and lab work, gradually tapering off in frequency. Derek, like all kidney recipients, will be on immunosuppressant drugs for the rest of the transplant kidney’s life, to try to prevent his body from rejecting it. This requires close monitoring.

“At the end of the day,” says Dr. Bynon, “we’re trying to help ensure the patient has a normal life. The goal is not just a successful transplant. It’s to ensure these kids have a long life and a good quality of life.”

By all appearances, Derek is fully on track. “When Derek was a year old and awaiting a transplant, he looked like a 6-month-old,” says Keisha. “He wasn’t walking. After he came home from the hospital, he was running and jumping off the sofa.”