Jon Bounces Back from Joint Pain 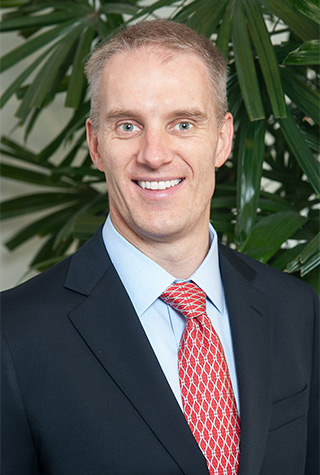 After extreme neck pain and arm pain, Jon had cervical disc replacement, and he has returned to a eventful and active life

While exercising at the gym one day, Jon felt a slight twinge of pain in his neck. Thinking nothing of it, he continued his workout and daily activities. During a spring break ski trip, that slight twinge became increasingly painful with each day and he developed radiating arm pain and weakness. “The pain was so bad at that point — the only way I could get comfortable was lying down, flat on my back, on the floor — it was unbearable”, he recalled.

After returning home from his ski trip and still experiencing tremendous pain, he immediately scheduled an MRI with affiliated physician, Dr. Mark Prasarn, MD to get to the bottom of the issue. Dr. Prasarn reviewed his scans and determined that Jon had a large herniated disc in his neck, which would require surgery. To treat the bulging disc, the appropriate surgical options were: cervical disc replacement or cervical disc fusion. “Given his young age, and the herniation being a soft disc, we offered him a cervical disc replacement rather than a traditional fusion. By preserving the motion this may prevent him from having a future cervical spine operation”, explained Dr. Prasarn.

Dr. Prasarn reviewed those options with Jon so he was fully informed of the advantages and disadvantages with each surgical treatment. With cervical disc replacement, an artificial disc is inserted to replace the damaged or diseased disc that is pressing on the nerves and causing pain. Research has shown that artificial disc surgery can improve neck and arm pain as safely and effectively as cervical fusion while maintaining range of motion. People who get the artificial disc are often able to return to work more quickly as well. Another benefit of cervical disc replacement is it reduces the stress on the vertebrae above and below the affected disc.*

A Sense of Urgency

Because of his extreme pain, Jon was pushing for surgery as soon as possible. “I had the MRI on a Monday in early April and Dr. Prasarn’s team worked really hard to get me scheduled for surgery that week. They were able to get me in on Friday that same week and I really appreciated their sense of urgency.”

According to Dr. Prasarn, “Jon had an uncomplicated surgery and his arm symptoms quickly resolved. He has done great and will be back skiing this season!”

A Return to the Slopes

Post-surgery and recovery, Jon’s overall quality of life has really improved. His range of motion in his left arm has fully recovered and he continues to enjoy being active and staying fit. In fact, Dr. Prasarn cleared him for a ski trip this winter. “I had a great experience with Dr. Prasarn and his entire medical staff – I would, and do, recommend him to friends and family for cervical disc replacement.”

Thank you for contacting the Memorial Hermann Orthopedics & Sports Medicine. We have received your inquiry, and a team member will contact you soon.