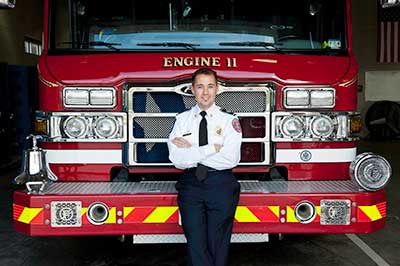 Rodney Janczak took his first helicopter ride on July 3, 1987, when he was nine years old. Following an automobile accident in a suburban area of northwest Houston, he was flown by Memorial Hermann Life Flight® to the Red Duke Trauma Institute at Memorial Hermann-Texas Medical Center (TMC), formerly known as Texas Trauma Institute, where he was treated by pediatric neurosurgeon, Stephen Fletcher, DO. Twenty-five years later, Janczak stumbled upon Dr. Fletcher's email address and sent him a message thanking him for the outstanding care he had provided so many years earlier.

Janczak had sustained head trauma and a fracture through the base of the odontoid process - a small, toothlike upward projection from the second vertebra of the neck around which the first vertebra rotates - which severely compromised the stability of his cervical spine. "I don't remember much about the accident, but I do know that I hit the window of the car, which caused the head injury, and that a bystander pulled me from the vehicle," he says. His injuries left him paralyzed on the right side of his body.

Dr. Fletcher put Janczak in a halo brace to support his neck in the correct position while the injured spinal column and ligaments healed. He went through rehabilitation to regain his ability to walk.

"When they removed the brace six months later, they saw that my neck hadn't healed properly," he remembers. Dr. Fletcher asked Howard Cotler, MD, an orthopedic surgeon affiliated with Memorial Hermann-TMC and a former faculty member at McGovern Medical School at The University of Texas Health Science Center at Houston (UTHealth), to assist in performing a spine fusion on Janczak. They used a portion of their patient's hip bone to fuse two vertebrae in his neck - C-1 and C-2.

Today, Janczak is assistant fire chief for a large fire department in the Houston area. Married and the father of a 16-year-old daughter, he's also an adjunct professor at Lone Star College, where he teaches fire science. He'll complete his doctorate in human resource and organizational development at Texas A&M University in the spring of 2016. An avid runner, he recently finished his fourth marathon.

Stories like Janczak's underscore the importance of Life Flight in improving outcomes for trauma injuries. "Having a hospital-based air ambulance service is standard of care for a Level I trauma center," says Dr. Fletcher, who is affiliated with Children's Memorial Hermann Hospital and an associate professor in the department of Pediatric Surgery at McGovern Medical School. "It ensures transport of injured patients to the appropriate trauma center faster, which helps improve outcomes."

Janczak is grateful for the care he received. "I'm certain none of this would have been possible without your help," he wrote in his email to Dr. Fletcher. You provided care to me and my family 25 years ago that can never be repaid. We thank you for that."