Wyatt’s spina bifida journey: How our miracle baby beat the odds one step at a time 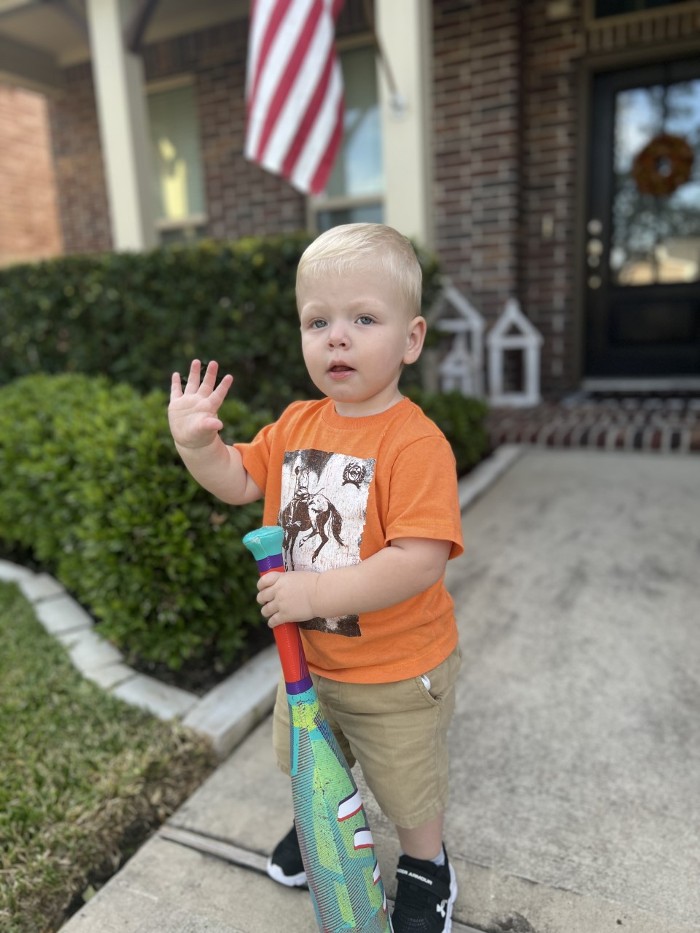 Sarah Carpenter was 17 weeks pregnant when she found out she was expecting.

“It took a while until I figured out that I was pregnant,” said Sarah. “I was tired and nauseous and felt a little tender – and that’s when I took a pregnancy test. My husband, Robert, and I weren’t trying to have a baby, but when we found out we were expecting – it was exciting. We were full of tears and joy.”

At 18 weeks, Sarah had her first OB-GYN appointment in Palestine, Texas, a few minutes away from the couple’s home in Dew in East Texas. During that visit, Sarah went in for an ultrasound to check on the baby’s growth and development, and to find out the gender. If it was a boy, they wanted to name him Wyatt.

A few weeks later, Sarah returned to her OB-GYN for another anatomy ultrasound. As the ultrasound technician glided the probe on Sarah’s growing belly, she noticed something unusual on the monitor.

“The ultrasound showed Wyatt had fluid in his brain,” said Sarah. “My OB-GYN sent us north to Dallas, and the specialist there confirmed our baby had spina bifida. Immediately, we were referred to the spina bifida team at The Fetal Center at Children’s Memorial Hermann Hospital in Houston.”

There are four types of spina bifida. Wyatt was diagnosed with myelomeningocele, a birth defect that occurs when an area of an unborn baby’s spine does not form properly inside the womb, exposing a section of the spinal cord and spinal nerves. This results in damage to the baby’s nervous system. It is the most common neural tube defect in the United States, affecting approximately 2,000 babies born each year. The condition can cause severe and lifelong disabilities, such as difficulty walking and going to the bathroom. Other complications associated with spina bifida include hydrocephalus, an abnormal accumulation of cerebrospinal fluid within cavities, called ventricles, inside the brain.

“We were heartbroken about the diagnosis, but we were determined to do whatever we could to give our baby a fighting chance,” said Robert. “We began researching about spina bifida and the different trials being done. More than anything, we wanted to ensure our son had the best possible outcome.”

On December 17, 2020, Sarah and Robert arrived in the Texas Medical Center to meet with the spina bifida surgery team affiliated with The Fetal Center at Children’s Memorial Hermann Hospital, which included specialists from McGovern Medical School at UTHealth Houston. The couple went through a three-day evaluation at the UT Physicians outpatient clinic, where the team explained several treatment options for their son’s spina bifida.

The Fetal Center is a national referral center and an international leader in fetal diagnosis, fetal intervention and comprehensive fetal care for infants with congenital and genetic abnormalities. In collaboration with pediatric subspecialists at McGovern Medical School, the team offers patients a complete range of prenatal testing and fetal interventions with a coordinated program for mother and child before, during and after birth.

“We had so many doctor’s appointments,” said Sarah. “We met with members from UTHealth Houston’s maternal-fetal medicine, pediatric neurosurgery, anesthesia, pediatric surgery and neonatology, as well as the genetic counseling and social work teams. During these three days, my baby and I underwent multiple evaluations. The doctors discussed various procedures available to us, and the risks and outcomes that could happen.”

When Sarah and Robert met with Ramesha Papanna, MD, affiliated professor of maternal-fetal medicine in the Division of Fetal Intervention in the Department of Obstetrics, Gynecology and Reproductive Sciences at McGovern Medical School and a co-director of The Fetal Center, he told them about a clinical trial only taking place through McGovern Medical School, with Children’s Memorial Hermann Hospital serving as the study site. Dr. Papanna is internationally recognized for his research on improving outcomes following fetal intervention and investigating methods for the prevention of preterm delivery. The trial he is leading involves minimally invasive fetoscopic surgery to place a NEOX® Cord 1k patch made of donated cryopreserved human umbilical cord on the spina bifida defect to reduce the risk of tissue damage at the repair site.

“This innovative patch has anti-inflammatory, anti-scarring and regenerative properties, which has been shown to reduce spinal cord damage in preclinical studies of in utero spina bifida repair,” said Dr.  Papanna. “Early attempts at in utero surgery for neural tube defects used a variety of techniques with varying degrees of success. One of the biggest challenges was scar formation at the repair site, which can cause further complications like tethering, where the spinal cord attaches to the scar tissue. We believe fetoscopic spina bifida surgery, leading to watertight closure and scar tissue minimization, may provide better outcomes for both mother and baby as well as improve outcomes over the course of the baby’s life.”

When Sarah learned she and Wyatt qualified for the fetoscopic umbilical cord patch procedure, she and her husband were relieved. Of all the options presented to them, they knew this was the best option for their family.

“Ultimately, our faith in God and the guidance we got from all of the doctors who would be involved in our son’s care prompted us to participate in this trial,” said Sarah. “Even if we waited until Wyatt was born to do the spina bifida repair surgery, there was a greater chance of him not walking and losing his ability to function from the waist down. We were determined to prevent that in any way possible.”

Dr. Fletcher, Dr. Papanna and Dr. Austin performed Wyatt’s surgery. During this procedure, the spina bifida surgery team made a vertical incision from Sarah’s belly button to midway down the pelvic bone to open up the abdomen for the fetoscopic repair. Guided by ultrasound, three small incisions were made into Sarah’s uterus, about 3-4 mm each, to insert a small camera and surgical instruments to close the spinal cord defect on Wyatt. From there, the team exposed the spinal cord and carefully sewed the umbilical cord patch in place over the small defect on Wyatt’s spine.

“My recovery was not bad at all,” said Sarah. “I stayed in the hospital for about three days, and then my husband and I spent the next few weeks in Houston where I had weekly ultrasound appointments with my maternal-fetal medicine physician, Jerrie Refuerzo, MD, before heading back home for five weeks waiting for Wyatt to be born.” Dr. Refuerzo is a professor of maternal-fetal medicine in the Division of Fetal Intervention in the Department of Obstetrics, Gynecology and Reproductive Sciences at McGovern Medical School and a specialist affiliated with Children’s Memorial Hermann Hospital. 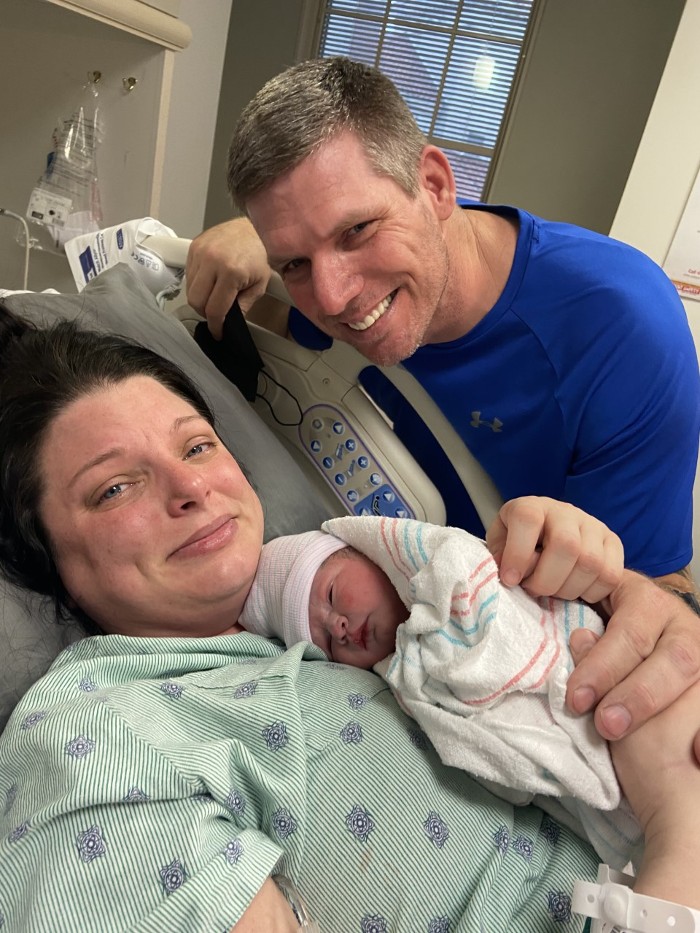 The Carpenters returned to Children’s Memorial Hermann Hospital to welcome their son, Wyatt. Their baby boy was born via vaginal birth on March 13, 2021, and weighed 5 pounds, 3 ounces. Dr. Bergh, a maternal-fetal medicine physician and member of the fetal surgery team, delivered Wyatt at 33 weeks, four days.

“I started having labor pains and then after I got the epidural, my water broke and then a few hours later, Wyatt was here,” said Sarah. “He had a tiny micro-scab on his back. He had full movement of his legs, and his bowel and bladder function were normal. He was in the NICU for 17 days. He was on his tummy until the day he was discharged because Dr. Fletcher wanted to be certain Wyatt was completely healed.”

The neonatal intensive care unit (NICU) at Children’s Memorial Hermann Hospital has 118 beds and is classified as a Level IV NICU by the Texas Department of State Health Services (DSHS)—the highest level of care available for premature and critically ill newborns.

Now 18 months old, Wyatt is doing great. He has reached his milestones. He loves to run and play  and is very active. His follow-up care is managed through the UT Physicians spina bifida program, which is home to a multidisciplinary team composed of seven specialties that provide compassionate, coordinated care. Through the program, the team works with The Fetal Center to provide a seamless transition of care from fetal diagnosis and intervention to postnatal care in Children’s Memorial Hermann Hospital, and finally, to the outpatient clinic setting. The medical director of the program is another one of Wyatt’s physicians, Jason Au, MD, who is assistant professor in the Division of Pediatric Urology in the Department of Pediatric Surgery at McGovern Medical School and is affiliated with Children’s Memorial Hermann Hospital.

Since he was born, Wyatt meets regularly with Dr. Au to make sure his bladder and kidneys are safe. Wyatt is also monitored for hydrocephalus by Dr. Fletcher. So far, Wyatt’s head size is normal, and he doesn’t need a shunt.

“We are blessed to have a wonderful team who took such great care of Wyatt,” said Sarah. “From the fetal care team to the surgeons and the NICU nurses, they all made us feel like we were part of our son’s care and prepared us for anything we needed to know or do. Looking back on everything, we are thankful we had the spina bifida fetal repair surgery for Wyatt. He is our little miracle baby. We are so happy to help get Wyatt’s story out there in hopes of helping others find out about this trial.”