What is Radiation Therapy? 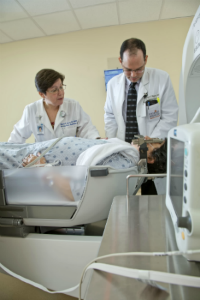 According to the American Cancer Society, more than half of all people undergoing cancer treatment will receive some form of radiation therapy.

Cancer cells have an increased sensitivity to DNA damage compared to healthy cells, so the goal of radiation therapy, which uses high-energy X-rays, , is to injure or destroy cancer cells by damaging their DNA — making it impossible for the cells to continue to divide and spread.

Although radiation can damage normal cells as well as cancer cells, doses are calculated to minimize exposure to surrounding tissue. If normal cells are impacted, your body will work to repair these normal cells and tissues over time.

To increase the likelihood of a positive outcome, radiation therapy may be paired with other cancer treatments, including:

Looking to refer your patient for radiation therapy?
Learn More

How is Radiation Therapy Used?

Radiation therapy is typically most effective when used for cancer or tumors that are located in specific parts of the body. Radiation is primarily used to eliminate certain types of cancer, but can be used in other instances, including:

As medical technology continues to improve, radiation oncologists will have more options available to help deliver highly targeted and even more precise treatments, resulting in less risk to patients and, ultimately, better outcomes.

What to Expect from Radiation Therapy Treatment

If your doctor is recommending radiation therapy to treat your cancer, you may be unsure of what to expect. To better understand how the treatment works and why it may be necessary, we recommend you schedule a consultation with a board-certified radiation oncologist. Afterward, you and your oncologist can discuss your options and develop a treatment plan that’s designed to provide you with the very best chance of success.

Radiation therapy targets the specific parts of the body where tumors or cancer cells are present and differs from other cancer treatments that expose your entire body to intense cancer-fighting medicine. Depending on where your cancer is located, radiation therapy can be delivered through a variety of means, including:

When you think of “conventional radiation therapy” you’re likely thinking of External Beam Radiation Therapy (EBRT). During EBRT, patients lie down on a treatment table while a linear accelerator (a tool that accelerates electrons or high energy X-rays) delivers a beam, or several beams of radiation to a targeted tumor site. With careful planning, EBRT can destroy cancer cells with minimal damage to surrounding tissue.

Tumors are not perfectly flat or round, which is why it’s important to be as accurate as possible during treatment. Intensity-Modulated Radiation Therapy (IMRT) uses computer-controlled linear accelerators to break up radiation doses into several “beamlets,” which changes the intensity and size of each dose. By reducing the amount of excess radiation exposure to normal tissue, IMRT makes it possible to use higher and more effective radiation doses typically resulting in fewer side effects than conventional radiotherapy techniques.

Image-Guided Radiation Therapy (IGRT) is similar to IMRT, but uses occasional visual scans to provide more precise targeting of the tumor before and during treatment. This addition makes IGRT an effective treatment for cancers in areas of the body where there is excessive motion, such as the lungs and upper abdomen. Before and during treatment, your care provider will take X-rays or CT scans to ensure accurate tumor targeting.

By combining multiple imaging (X-rays or CT scans), along with localization techniques – including IGRT – and systems to help you stay still during treatment, SBRT can provide radiation delivery that is accurate to within one to two millimeters.

Unlike other types of radiation therapy, SBRT requires very few treatments, ranging from one to five sessions. These sessions can typically be completed in one week or less.

High Dose Radiation Therapy (HDR) is most commonly used for treating gynecologic and prostate cancers. This therapy allows radiation oncologists to administer higher doses of radiation over a shorter period of time, and deliver radioisotopes (the treatment materials) to afflicted areas with minimal damage to surrounding tissue.

The Gamma Knife® procedure does not involve an actual knife – instead, it uses multiple focused radiation beams to target tumors with unparalleled precision. In addition to treating multiple types of brain tumors, this highly specialized, robotic device can also be used noninvasively to treat a number of vascular and functional lesions, including arteriovenous malformations and trigeminal neuralgia.

What Are the Side Effects or Risks of Radiation Therapy?

Like other cancer treatments, patients will react differently to radiation therapy, depending on the type of cancer, the location of the cancer and the amount of and type of radiation prescribed.

Common side effects of radiation therapy can include:

During or after treatment, you may or may not experience side effects. In general, patients who do their best to maintain a healthy lifestyle before and during treatment are more likely to have a positive experience. The radiation oncologist and your cancer care team understand which side effects may occur, so you can work together to better manage any negative symptoms you may experience.

Why Choose Memorial Hermann for Treatment?

Memorial Hermann Cancer Centers are accredited by the American College of Surgeons’ (ACoS) Commission on Cancer (CoC). This rare distinction is given to cancer programs that uphold the highest standard of care for patients. When you choose Memorial Hermann Cancer Centers for your cancer treatment, you can rest assured you will receive the best possible care delivered by a compassionate team of caregivers in a calm, healing environment.