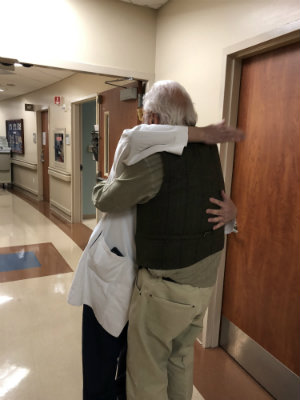 For one grateful patient, a chance meeting long ago has sparked a special friendship and inspired annual gifts to support the heart and vascular program Dr. Safi helped build.

It began on what was a typical Sunday for oilman and cattle rancher James R. “Buzz” Hurt, until it wasn’t. One minute he was saddling up his horse, the next, they were both sprawled out flat on the ground, his horse struggling to get up off Buzz’s left leg. In the process, the horse knocked into him, splitting his hearing aid in two and cutting him badly.

“I called my wife, Betsy, and told her I’d had a bit of an accident,” Buzz recalls. “When she saw me, she knew we had to get to our local emergency room.”

There, doctors looked him over and bandaged his ear after somehow managing to get him to take off his beloved cowboy boots. When he tried to put his boots back on, he nearly fainted. Tests revealed an irregular heartbeat and an ascending aortic aneurism. By the following Friday, he was flying from Odessa to Houston, where Dr. Safi made the complicated repairs. It’s a dangerous procedure few hospitals can perform, even few with the results Memorial Hermann-Texas Medical Center sees.

Ironically, replacement valves for these procedures are made from cattle tissue, which Dr. Safi dubbed a “bull valve” in Buzz’s case.

That was more than 10 years ago, and yet, Buzz, now nearly 90, still makes regular treks to Houston to see his old friend, Hazim, and to comfort patients recovering from the same kind of operation that saved his life. And every year since that fateful day on the ranch, he and Betsey have made generous gifts to the Memorial Hermann Foundation in appreciation.

Dr. Safi saved my life. Once I was able to, I knew I needed to go see him and make a gift to support the heart program. It’s the least I could do.