Incomplete tetraplegia is the most frequent neurologic category after spinal cord injury (SCI). Each year, nearly 12,000 people suffer from SCI in the United States, and about 50 percent of these are reported to be injuries at cervical lesions, representing mild to severe impairment in arm and hand functions. Over the years, life expectancy after injury has increased, which has resulted in increased economic burden to meet individual needs of hospitalization, home and vehicle modifications, medications, supplies and personal assistance.

Despite extensive pre-clinical and clinical research and advancements in rehabilitation strategies, there is still no “cure” identified for SCI and therefore, it continues to be a major cause of long-term disability. Given the fact that the majority of individuals with SCI are in their most productive years with a life expectancy nearly approaching those of the healthy population, more aggressive treatment strategies focusing on improvement of peripheral muscle control and functions, as well as the recovery of the central nervous system (CNS), are needed. More than half of the population with tetraplegia indicated that regaining arm and hand function would most improve their quality of life. Despite this evidence, a great deal of technology and research has focused on improving leg strength and retraining gait after SCI and not on upper-extremity strength and function. Furthermore, little research has been directed at understanding and optimizing interventions for the upper extremity when compared to gait training.

Neuroplasticity of the Central Nervous System

Since the work by Santiago Ramon y Cajal in 1928, the common assumption has been that the CNS is hardwired, which suggests that it is incapable of anatomical modification and self-repair. To some extent this assumption might have affected the approach of rehabilitation specialists in designing treatment protocols so that education of compensation techniques to regain independency in daily activities, such as using assistive devices to accomplish eating, dressing and transfers, has been emphasized over more aggressive treatment strategies. However, over the last three decades the view of the CNS has undergone fundamental change. Numerous studies from basic science provide evidence that the brain is capable of producing new nerve cells and that these neurons are interconnected with existing nerve cells. Even following injury or during the course of neurodegenerative diseases, the brain and spinal cord have the physiological ability to reorganize synaptic connections. Therefore, understanding brain and spinal cord plasticity will provide a basis for developing better treatment interventions to facilitate return of function after injury. In fact, evidence from animal studies was successfully translated into clinical practice of interventions to promote recovery of walking in humans. One example of this type of plasticity derives from basic science studies in which cats with complete spinal transections respond to intense walking training in the absence of supraspinal input.

Studies of motor recovery of arm and hand functions after SCI are relatively limited and generally focused on functional electrical stimulation, exercise, neuroprosthesis, botulinum toxin injections, biofeedback or surgical interventions such as tendon transfers. In the last decade, introduction of robotic devices into rehabilitation has enabled semi-automated or automated high-intensity repetitive therapy, which otherwise would be quite labor-intensive (Takahashi et al., 2008; Kutner et al., 2010; Volpe et al., 2008). Intensity of treatment is an important determinant of recovery, and therefore, optimization of treatment protocols should focus not only on questions such as “context” and “when” but also on “how much.” Recent work in neuroscience demonstrates that treatment intensity has a profound effect on motor recovery and, even years after a neurological injury, neuroplasticity of the adult brain can be impacted by experience (activity)-dependent principles. Interestingly, studies have found that robotic-assisted therapy, in addition to traditional physical and/or occupational therapy, can improve motor recovery. Bringing robotics into rehabilitation provides additional advantages such as quantified assessment and monitoring of motor functions, bringing therapy to different venues including the home and increasing therapy efficiency with the possibility of group therapy. However, evidence-based randomized clinical trials are needed to promote recovery of upper-limb movements within the context of facilitating neural networks at the spinal and supraspinal level and thereby inducing intrinsic recovery mechanism and improving functions.

Over the past five years, our laboratory has been studying robotic-assisted combined treatment protocols in recovery of upper-limb motor functions after stroke and SCI. In a recently completed project, we used the MAHI Exo-II, from the Mechatronics and Haptic Interfaces (MAHI) Lab directed by Marcia O’Malley. PhD at Rice University, to study the feasibility, safety and efficacy of robotic-assisted training of arm and hand movements in persons with incomplete SCI. The subjects have completed 12 sessions of robotic training over a course of four weeks and were tested at baseline, after treatment and at six months for changes in motor functions and independence in daily living activities. Earlier work from this project was published as a case report in which a 28-year-old woman, 29 months after an incomplete SCI at the C2 level, classified as American Spinal Injury Impairment Scale C (AIS), received robotic-assisted training, based on her baseline motor abilities, either in constraint, triggered or passive modes (Yozbatiran et al., 2012). The positive gains in arm and hand movements suggested that highly repeatable active single-joint movements delivered through a rehabilitation robotic device can be safely implemented in treatment of upper-extremity training after cervical SCI. 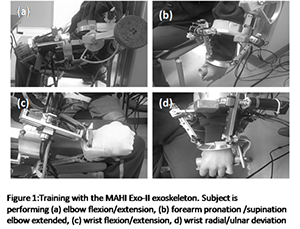 Our research is also focused on developing novel treatment protocols and understanding underlying mechanisms of recovery. One approach is combining modalities; in addition to pharmaceutical interventions, neuromodulation therapies such as noninvasive brain stimulation might be used as an add-on intervention to standard physical therapies. To date, several studies have found that combining motor cortical stimulation with behavioral therapies such as occupational therapy and repetitive rehabilitative training may augment recovery after stroke compared with movement alone. In this context, transcranial direct stimulation (tDCS) or transcranial magnetic stimulation (TMS) with robotic or functional exercise training can be implemented in augmenting outcomes from treatment. For example, adults with incomplete SCI demonstrated significant improvement in lower limb motor score, walking speed, and muscle tonus when their gait training was coupled with repetitive TMS (Kumru et al., 2010). The potential mechanism for such improvement was attributed to modified corticospinal influences, which might have increased corticospinal inhibitory input and reduced segmental spinal excitability, thus reducing spasticity in patients with incomplete SCI. In a recently funded project by Mission Connect, a project of TIRR Foundation, we are collaborating with Dr. O’Malley at Rice University; Khader Hasan, PhD, in the department of Diagnostic and Interventional Imaging at McGovern Medical School at UTHealth; and Gerard Francisco, MD, and Matt Davis, MD, of the department of Physical Medicine and Rehabilitation at McGovern Medical School, to study the effects of tDCS with robotic-assisted repetitive training of the upper limb in adults with tetraplegia due to incomplete SCI. 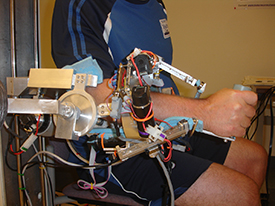 After 10 sessions of treatment, we noted that anodal tDCS to M1 (contralateral to the trained arm) improved hand motor function as measured with JTHFT (active group, from 0.27 items/sec to 0.33 items/sec, versus the sham group, from 0.23 items/sec to 0.24 items/sec); however, changes in functional scores were not statistically significant (p > .05). Pinch and grip strength also improved. DTI-derived values, fractional anisotropy, axial diffusivity, mean diffusivity and radial diffusivity of the corticospinal tract from 4 subjects (active group n = 2, and sham group n = 2) have not shown significant change. This study was the first of its kind in SCI to use combined central and peripheral stimulation in recovery of upper-extremity function. Modulating excitatory input of the corticospinal tracts on spinal circuits have shown promising results in improving arm and hand function in persons with incomplete tetraplegia. However, future clinical trials with a larger sample size are warranted to further evaluate the clinical effect of combined treatment modalities.

Given the strong evidence both from clinical practice and research, individuals with tetraplegia have a great desire to improve control of their arm and hand function. This evidence should lead rehabilitation researchers to combine their efforts with engineers and neuroscientists to design and develop treatment protocols with optimized frequency, intensity, duration and type of training.