Aerospace engineer Earle Powdrell was just getting settled into his corporate apartment near Dallas when he awakened at five in the morning with burning in his nose and throat. Away from home on a classified military assignment for the Raytheon Company, he assumed the problem was fatigue. 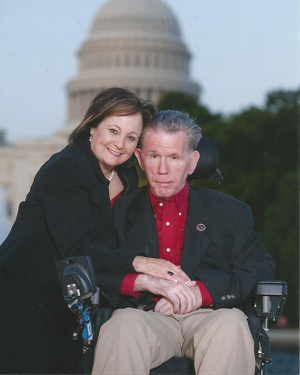 The 56-year-old took a shower, dressed, put on the coffee pot and sat down to read his email. When he realized the words were too blurred to read, he lay down on the floor to rest. Later, he recalled the sensation of a window shade being pulled down.

Police and paramedics found him more than 24 hours later after his wife, Kathy Powdrell, became concerned when she couldn’t reach him by phone. Admitted to a nearby community hospital, Powdrell was in intensive care when his family arrived from Houston. He was unable to move or speak; two days later an MRI revealed a massive brain stem stroke.

“The doctors told my wife and daughters that I was in a vegetative state, devoid of consciousness or physical feeling,” Powdrell says by way of the Tobii eye-tracking communication system he uses to write and speak. “But I was completely aware and alert. My children asked me to look up to signify yes and close my eyes when I wanted to say no. It was very hard for me.”

About 72 hours post event, he found the strength to blink. “We were told that what we were seeing were only primal reflexes, and we were encouraged by the doctors to deny care,” Kathy Powdrell says. “We didn’t believe that. Finally, a doctor agreed to test Earle’s cognition by asking him what he called a ‘high-level math question.’ The question was: what is the square root of 25? Earle blinked five times. Those five blinks saved his life.”

Powdrell was diagnosed with locked-in syndrome, a rare neurological disorder characterized by complete paralysis of voluntary muscles in all parts of the body except those that control eye movement. Individuals with locked-in syndrome are conscious and can think and reason, but can’t speak or move. The syndrome affects about 1 percent of people who have a stroke, and there is no recognized treatment or cure.

From that moment on, failure was not an option for me or for my family. I knew it would take all ‘the Right Stuff’ of the astronauts and cosmonauts I had helped train for the previous 30 years. I also knew my wife and children would fight for me.

“There was a huge question about my quality of life,” says Powdrell, who holds three United States patents in aerospace, including two for the Part Task Trainer, which trains astronauts and cosmonauts to dock to the International Space Station. “What could a locked-in patient’s life be like? My wife and I understood the challenge ahead. As a scientist, husband and father, I wanted to recover. From that moment on, failure was not an option for me or for my family. I knew it would take all ‘the Right Stuff’ of the astronauts and cosmonauts I had helped train for the previous 30 years. I also knew my wife and children would fight for me.”

Powdrell was transported to the Memorial Hermann Mischer Neuroscience Institute at the Texas Medical Center in a fixed-wing plane operated by Memorial Hermann Life Flight®. There he used a spelling board to tell neurologist Andrew Barreto, MD, that he understood his diagnosis and wanted to recover and help science.

Ironically, the rocket scientist who spent his career developing technology for the aerospace industry and national defense had become dependent on similar technology for his quality of life. “I knew immediately that I would need creative engineering to restore my network of nerves and muscles,” he says.

Powdrell found what he was looking for at TIRR Memorial Hermann, and spent the next seven months working with a skilled team of physicians and therapists including Jennifer Hale, PT, DPT, NCS, Adele Bosquez, PT, DPT, ATC, LAT, Margaret Marquart, PT, Michelle Dehgan, CCC-SLP, BCS-S, CBIS, and Rafferty Laredo, OTR, ATP. When asked if it was difficult to maintain his drive to succeed during the demanding days of treatment and rehabilitation, Powdrell answered with a resounding no.

“I had a great team,” he says. “TIRR Memorial Hermann is a place of hope with miracles happening every day. Just like in aerospace, my team kept their eye on the goal. They gave me back my life and my hope.”

Powdrell relearned how to sit, swallow, eat, drink and turn his head to the right and left. He learned how to drive a specialized wheelchair with his head and chin, and how use the Tobii eye-tracking communication system.

“The most efficient applications in the aerospace industry parallel my life post stroke,” he writes in an email using Tobii. “The Tobii 12 is my communicator and window to the world. Without it, I would be locked in. We have used eye-gaze systems and cameras in aerospace since the end of World War II to understand where a pilot’s eye goes under various flight conditions during visual monitoring tasks. We use the data to calculate the relationships between the frequency of looking and the importance of an instrument, which helps us design the most efficient cockpits. Now I’m using eye-gaze technology to type a sentence using my eyes in the most efficient manner to conserve my energy. I dwell on a letter for 1.2 seconds. Specially calibrated cameras read the light reflection in my eye, and the letter types onto the screen.”

Every morning Powdrell’s wife or his caregiver turns the Tobii on, allowing him to check his email and respond. “I use Tobii to communicate with my family and therapists. I’m using it to write my story and to write children’s stories about science in honor of my four grandchildren,” he says. He also uses it locally and nationally to advocate for the rights of people with disabilities beyond the Americans with Disabilities Act.

Former TIRR Memorial Hermann occupational therapist Rafferty Laredo, who is now executive director of the Houston Chapter of the National Spinal Cord Injury Association (NSCIA), has helped Powdrell find his political voice. For the last three years, he has travelled to Washington, D.C., to participate in United Spinal’s Roll on Capitol Hill, where he advocates for access to affordable care, tax relief for families affected by disability, consumer direct quality health care, community reintegration and the United Nations Convention on the Rights of Persons with Disabilities. He was a strong advocate for the Achieving a Better Life Experience (ABLE) Act, which was signed into law by President Barack Obama in December 2014 and allows people with disabilities to open special accounts where they can save up to $100,000 without putting their eligibility for Social Security and other government programs at risk.

In 2015, certified clinical instructor Laura Martin, PT, NCS, former center coordinator for clinical education at Powdrell, who will travel to Washington in June 2015 as one of four NSCIA representatives from Texas, says his work with that organization and United Spinal gives his life purpose. “Bringing attention to quality-of-life issues for people with disabilities is as important as my work in the aerospace industry,” he writes. “No one recovers from a stroke in the 28 visits paid for by most insurance companies. I share this truth with congressmen and senators at Roll on Capitol Hill. You cannot train for a marathon or the NBA or NFL in 28 days. How can we expect people to recover from a stroke in 28 days? I’m fighting to give this decision back to teams of doctors and therapists and to patients and their families.”

About 90 percent of individuals with locked-in syndrome die within four months of onset, most often of secondary infections. Powdrell, a five-year survivor, is going strong. “I did not choose this stroke. It chose me. In my daily life I have tried to prove that there can be quality of life even if you’re locked in. I went to work right after my stroke and continue to this day to work on restoring the wiring of my mind.”

Powdrell attends outpatient therapy sessions two to five days a week to continue unlocking his world. Last September he returned to the Mischer Neuroscience Institute to speak at Grand Rounds for the second time – “a small way to say thank you for saving my life.”

He believes we’re standing at the frontier of advanced medical engineering that will open a universe of possibilities. “My wheelchair, a Permobile 500, allows me to tilt and reposition myself. In addition to giving me mobility, it allows me to stand and meet the world again eye to eye,” he says. “Looking ahead, I believe that technology such as InvoTek, Brainfingers and other computer-brain interfaces will help people with disabilities reach their potential through real-time engineering solutions that enable them to move and speak.”

The words of TIRR Memorial Hermann’s founding physician, Dr. William Spencer, inscribed at the base of the sculpture Prometheus Unbound that stands at the hospital’s entrance, have special meaning for Powdrell: “Man uses the tiniest of strengths for the greatest purposes.”

“With five blinks of my eyes, I saved my life,” he writes. “When my family finally took me out on the patio to see that statue, I knew I would recover for an important purpose. I want to continue to write and advocate at the grassroots level and the national level. I want to help with international efforts to provide everyone with equal access to a quality of life that includes work, travel and living independently. I will continue as a motivational speaker proving that no matter how small your ability is – even if it’s only the blink of an eye – you can live a productive life in your home filled with the love of family.”