Houstonian Valentina Lisinski did everything right – and quite a bit more. She ate well and exercised regularly, practiced yoga, went SCUBA diving and parachute jumping, and participated in local competitions dancing the two-step, swing and Venetian waltz. At 53, she was in great shape. 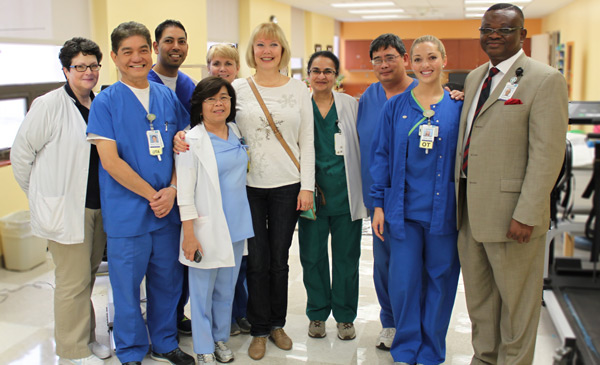 November 2010, Lisinski and a girlfriend packed for a dream vacation – a 12-day trip to one of the world’s natural wonders, Iguazu Falls on the border between Argentina and Brazil. “In the middle of our vacation, I woke up in the hotel at night and couldn’t move,” she recalls. “My right side was totally numb. In a panic, I tried to get up and fell on the floor. My friend woke up and asked me what was wrong. In my mind I could talk perfectly, but when the words came out of my mouth it was just horrible, horrible noise.”

Local doctors suspected an ischemic stroke, but specialized medical treatment was not available in that remote location. While Lisinski was making the 20-hour trip to Buenos Aires by ambulance, her husband Terry Lisinski was flying from Houston to meet her. The next morning the couple took a commercial flight home, where he had scheduled an appointment with neurologist Herbert Edmundson, MD. After reviewing the results of her MRI, Dr. Edmundson admitted Lisinski to Memorial Hermann Southwest Hospital, a Joint Commission-designated Primary Stroke Center.

Under the guidance of physical medicine and rehabilitation specialist John Chike Anigbogu, MD, she began three-and-a-half weeks of inpatient rehabilitation. “At first I was stubborn because I didn’t believe therapy would help,” says Lisinsky, who was born in St. Petersburg, Russia, and came to the United States with her second husband, an American, in 2004. “Dr. Edmundson had shown me the size and location of the stroke on MRI and I knew how damaged my brain was. But my husband inspired me and the therapists at Memorial Hermann Southwest gave me a second life. They said, ‘Do the exercises in your mind, and after a while your body will follow.’ Finally after a week of very hard work, I made a small movement with the index finger of my right hand. After that, I started to work more mindfully, more strong.”

Lisinski’s story is not uncommon. Last year, an article in the Washington Post concluded that strokes, long on the decline in the elderly, are rising among younger adults. The article cited several studies, including one from 2010 published in the journal Stroke that found the rate of ischemic stroke tripled in 35- to 54-year-old women between 1988 and 2004. A 2011 Centers for Disease Control and Prevention report showed that hospitalization for ischemic stroke increased by more than a third in 15-to 44-year-olds in the 14-year period that ended in 2008.

After discharge from the inpatient unit at Memorial Hermann Southwest, Lisinski continued therapy at TIRR Memorial Hermann Outpatient Rehabilitation on the Campus of Memorial Hermann Memorial City for five more months. “The physical and occupational therapists worked very hard with me,” she says. “I learned to write for the second time in my life. When I wrote my first letter to my husband after the stroke, it looked like something a first-grader would write. Over time, everything improved.”

Every year between the American celebration of Christmas on December 25 and the Russian Orthodox celebration on January 7, Lisinski visits the inpatient rehabilitation unit to say thank you. “Two years ago I had the opportunity to visit a patient who had a stroke and was depressed because she had it at such a young age. I told her my story. I couldn’t speak. I couldn’t go to the restroom. I had to ask for help with everything. Finally, she turned her head to me and said, ‘Thank you.’ Those were the first words she had spoken since her stroke.”

Lisinski considers herself very fortunate. “My husband took action immediately to get me where I could get help,” the 57-year-old says. “I’m still working on my memory, but no one can tell I had a stroke four years ago. Thanks to Memorial Hermann, I’m about 98 percent back to normal. But I’m stubborn so I’m still working on it myself. I want to run again. I want to wear high heels. Already, I can wear two-and-a-half-inch heels. Next it will be four inches.”