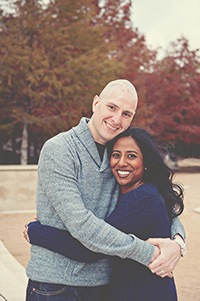 “A neuropsychology evaluation provides a snapshot of how a patient is functioning in reasoning, memory, attention and language at a given point in time relative to healthy peers,” says Dr. Demireva, who earned her doctorate in psychology at Ohio State University. “Patients with brain tumors function can fluctuate a bit over the course of treatment. There are relative improvements and relative declines, depending on whether they’re in active treatment or taking a break. Surgery may bring an improvement or a decline, and patients may experience a change with radiation therapy, either shortly after therapy is completed or months or years later due to radiation necrosis. Active chemotherapy impacts cognitive functioning. Because their status is marked by constant change, brain tumor patients should be evaluated periodically by a neuropsychologist.”

Martín Romero Sanchez has lived the experience Dr. Demireva describes since August 2012 when he was diagnosed with grade 3 astrocytoma and grade 4 glioblastoma multiforme (GBM). Six months earlier he began suffering terrible headaches on awakening, along with nausea and muscle stiffness in the neck and shoulders. He was only 28, and a brain tumor was off everyone’s radar.

After months of headaches and only temporary relief provided by muscle relaxants and painkillers, Romero Sanchez and his wife, Karma Punwasi, asked their primary care provider to order a CT scan. “Within hours of the scan, my doctor called me and asked if Karma could drive me to the ER immediately,” he says. “The scan showed extensive swelling in my brain even though I was walking and talking just fine.”

“As soon as we heard the word neurooncologist, we knew it was cancer,” Punwasi says. “In 24 hours our lives changed. In that short period of time Martín went from having terrible headaches, to having extensive swelling, to having a mass in his brain, to meeting a neuro-oncologist, to scheduling his first craniotomy.”

Nitin Tandon, MD, a professor in the Vivian L. Smith Department of Neurosurgery, resected the tumor, and a few days later, on August 24, 2012, the couple heard the GBM diagnosis. “We’d been married only two years, we’d bought a new home, I was looking forward to finishing my master’s in engineering and we were ready to start a family,” Romero Sanchez says. “Instead, I found myself looking at an immediate future of radiation therapy and chemotherapy.”

As a patient with newly diagnosed GBM, Romero Sanchez qualified for a phase 3 multicenter clinical trial testing the efficacy and safety of a medical device called Novo TTF-100A in combination with the chemotherapeutic agent temozolomide, compared to temozolomide alone. The device, which study participants wear on their scalp, provides a constant low-voltage electric field that has been shown to reduce tumor cell survival and division capacity. Dr. Zhu enrolled him in the trial in December 2012.

The following February, Romero Sanchez underwent a second craniotomy to remove necrotic tissue and tumor progression. “By April, there were still two little persistent spots that couldn’t be removed by surgery,” Punwasi says. “Dr. Zhu started infused chemotherapy with bevacizumab and irinotecan every two weeks, and in May, Martín had his first stable MRI, with no sign of tumor progression. The combination of therapies helped him maintain that equilibrium for more than two years.”

Punwasi started looking for programs that would help her husband develop strategies to compensate for the cognitive deficits caused by his frontal-located GBM and possibly by the radiation and chemotherapy. Dr. Zhu referred them to Jacob Joseph, M.D., clinical assistant professor of physical medicine and rehabilitation at McGovern Medical School at UTHealth and clinical chief of Specialty Rehabilitation Programs at TIRR Memorial Hermann. Dr. Joseph admitted Romero Sanchez to the TIRR Memorial Hermann Challenge Program, which has a 30-year track record of success in helping brain injury survivors develop the physical abilities, memory strategies, interpersonal communication and problem-solving skills they need to return to work, school and life in the community.

“It was difficult for Martín to manage time, remember details and get started on an activity without prompting,” Punwasi says. “He really benefited from the structured environment and social interaction he got in the Challenge Program.”

After two years of relatively smooth sailing, a routine follow-up MRI in July 2015 showed two spots of tumor progression. On August 25, Romero Sanchez underwent his third craniotomy. Once again he bounced back.

“Immediately after the surgery Martín could barely use a fork to eat, but two months later we were walking in the American Brain Tumor Association’s BT5K to raise funds for brain cancer research,” his wife says. “When we’re not bogged down with MRIs, doctors’ appointments and infusion sessions, we devote our time to helping other brain cancer survivors and their families.”

The couple actively participates in two local brain tumor support groups, and both are members of the American Brain Tumor Association’s CommYOUnity, a nationwide volunteer network and Run for the Rose. They also attend annual brain cancer conferences and events to build a network of patients and families.

Romero Sanchez’s brain tumor significantly changed their lives. “One of our biggest challenges was learning to roll with the punches, while staying positive and moving forward,” Punwasi says. “We don’t move as fast as we used to, and suspense, fear and uncertainty are part of our daily lives. But at the same time we will not let cancer define us.”

As a result of their positive experience with the Challenge Program, the couple started looking for a neuropsychologist to help. Earlier this year, they met Dr. Demireva at a support group.

“As treatments for brain tumors improve, we’re seeing longer-term survivors living with cognitive challenges,” she says. “This has led to a burgeoning need for neuropsychologists who specialize in oncology. We want to find ways to provide structure for Martín and give him the best chance of preserving cognitive function and preventing any future loss of ability.”

Four years out from his diagnosis, Martín has far outlived the glioblastoma multiforme prognosis, which is 14.6 months. “I attribute that accomplishment to my incredible medical team at Memorial Hermann and the amazing support of my wife, family and friends,” he says. “As Dr. Zhu wisely said, ‘You have to keep a positive attitude to stay ahead of the cancer. No therapy in the world is going to work if you don’t think you can beat this.’ At that point, I made the decision not to let cancer break my spirit. Being sad and depressed about my diagnosis wouldn’t change anything. I would still have brain cancer. So I continue to live my life with the same tenacity I had before the diagnosis.”

If you were to meet Romero Sanchez on the street, it’s unlikely that you would recognize him as a patient, other than the surgical scar. “Looking back I realize that Martín and I were naïve in believing that our lives wouldn’t change as much as they have,” Punwasi says. “But we continue to cling to that naïveté because it’s hope, and hope is what keeps Martín and I going until there’s a cure. We have to believe we’re going to beat this.”