Around the Memorial Hermann Rehabilitation System

They had known each other for 15 years but it took a life-changing accident to bring Brandon Johnson and Angela Vanek together at The Woodlands Courthouse, where they exchanged wedding vows before family and friends on Feb. 26, 2016. Following a motorcycle accident that left him paralyzed from the chest down – and rehabilitation at TIRR Memorial Hermann and TIRR Memorial Hermann- The Woodlands – Johnson is on a mission to help others living with spinal cord injury take control of their lives.

On a foggy night in December 2013, Johnson was about a mile from his home in Conroe, Texas, when he veered off the road on his motorcycle and hit a guardrail. “I flew off my bike head forward and landed with my body half on the asphalt and half off,” he says. “My ex-wife was about three minutes behind me. I was unconscious when she arrived, and she later told me she could tell my back was broken because of the way my legs were sprawled on the road. By then someone had already called 911.” 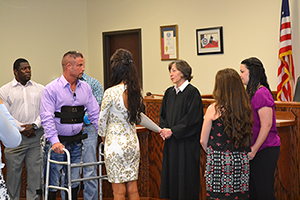 The fog made air transport impossible, and Johnson was taken by ground ambulance to Ben Taub Hospital’s Level 1 Trauma Center in the Texas Medical Center. Trauma surgeons fused his spine at the T9 level and stabilized it with two titanium rods. After a month-long hospitalization at Ben Taub, Johnson was admitted to TIRR Memorial Hermann for rehabilitation under the direction of Lisa Wenzel, MD, an attending physician in the hospital’s Spinal Cord Injury Program and an assistant professor in the department of Physical Medicine and Rehabilitation at Baylor College of Medicine.

“When I learned that I might not ever walk again, my heart sank,” he says. “So the first week I was at TIRR, I was really scared. By the second week I was still very nervous about my future, but I made good progress. I left in a wheelchair and was told to watch out for pressure ulcers but I found transfers difficult and ended up getting one anyway. Then it kept getting worse.”

In January 2015, after reconstructive flap surgery and a six-month recovery, Johnson started outpatient therapy at TIRR Memorial Hermann-The Woodlands. “With a complete spinal cord injury, Brandon was unable to walk,” says Laura English, PT, DPT, CBIS. “He had some difficulty with more complicated transfers and was unable to participate in any activities that required higher-level mobility. But he was very fit before his injury and had substantial upper-body strength that we could build on in therapy.”

Johnson was also very driven to improve. After mastering the parallel bars, he graduated to a walker and set a goal for himself of walking with forearm crutches. Today, he walks in a reciprocating gait orthosis customized to his specific needs. The body brace allows him to move his legs by using his hip flexors to shift one leg in front of the other.

Since his accident, Johnson’s life has been filled with dramatic change. During the two and a half years that passed after his accident, the 36-year-old oilfield worker and his former wife, Brandi Allgood, were divorced.

“Getting together with Angela was one of those weird things that happen in life,” he says. “I bought my parents’ old house, and her parents live four houses down from me. My family knows her family. I got divorced, and eight months later I got remarried. I feel like it was all meant to be.”

English was among those from TIRR Memorial Hermann-The Woodlands who attended the wedding. “Brandon was determined to walk to his wife and stand at the wedding,” she says. “I know he was nervous about using the brace. We’d been working with it in therapy, and he made very good progress, but it’s a big brace and very bulky. Not many people have the upper-body strength required to use it. He’s the rare person who can. At the wedding it was obvious that he liked being eye to eye with his friends and wanted to remain standing.”

Of his brace, Johnson says, “It’s a major workout – all upper body – and you quickly get burned out, so I mostly use a wheelchair to get around.”

Johnson is currently training to participate in the wheelchair division of a body building competition in Nashville, Tennessee, in early November. After an 18-year career in the oilfield business, he now sees a new future for himself.

“I want to help people who use wheelchairs build their upper-body strength and conditioning by working with weights,” he says. “If you happen to fall out of your wheelchair, you need to have the strength to get back up in the chair without calling 911. My goal is to help other people set goals for the future and build new lives for themselves.”

English thinks he’ll succeed. “You can’t aim for fitness competitions without real dedication,” she says. “What stands out most about Brandon is his motivation and the fact that he wants to help people get stronger and find ways to cope psychologically with their spinal cord injury. He’ll be really good at that.”