Like many of Strength Unlimited’s clients, Kel Mabatah came to TIRR Memorial Hermann’s community-based wellness and recovery program between a gap in outpatient therapy sessions to maintain the skills he had worked so hard to gain. The program provides an enriched environment for people of all levels of ability to optimize their recovery and create a path for lifelong health and wellbeing. 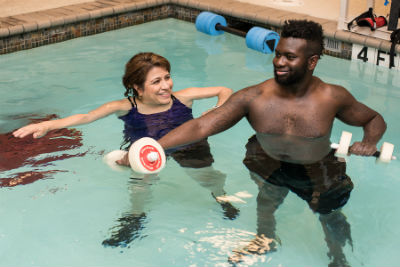 It’s been two-and-a-half years since Mabatah, a graduate of Texas Christian University (TCU) in Fort Worth and a former professional tennis player, suffered a fractured skull and lost teeth during a brutal attack on his family’s business compound in southern Nigeria. In December 2014, he was hit in the head with the butt of a rifle, stabbed in the stomach and left for dead. The assault resulted in a severe traumatic brain injury that left him paralyzed on the right side and unable to speak. Found by police, he was rushed to a local hospital in Agbor and transferred the next morning to a medical center in Asaba, 20 minutes away, where he had the first of four brain surgeries. Thirteen days after the attack, he made the 12-hour flight to Houston, where he underwent his second brain surgery at Memorial Hermann Southwest Hospital. He was transferred to Memorial Hermann-Texas Medical Center for his final two brain surgeries.

Houston is home to Mabatah, who graduated from The Kinkaid School, a private coeducational prep school in the greater metropolitan area. At Kinkaid he was captain of his school’s tennis team and won All-Southwest Preparatory Conference honors for three consecutive years. A passionate athlete, he led his team to conference championships during his junior and senior years.

After high school, Mabatah attended Purdue University on a tennis and academic scholarship until his junior year, when he was sidelined by two elbow injuries. He transferred to Texas Christian University, where he played tennis for the next two years, during which the school’s team won consecutive conference championships. After graduating from TCU, he spent a year playing tennis professionally, and then retired from the sport to work with his father in the family business in Nigeria.

“For three or four years I lived between Houston and Nigeria, spending about half my time in each place,” Mabatah says. “That old Kel died on Dec. 3, 2014, and the new Kel was born on Dec. 9, 2014, when I emerged from a coma with a second opportunity at life.” After a three-week inpatient hospitalization, he was admitted in to TIRR Memorial Hermann, where he underwent a rigorous program of physical therapy, occupational therapy and speech therapy, followed by outpatient rehabilitation at TIRR Memorial Hermann Outpatient Rehabilitation at the Kirby Glen Center.

“I took a break from outpatient rehab when I used up my insurance benefits for the year,” Mabatah says. “My physical therapist, Daniel Wingard, suggested the Strength Unlimited program because I wanted to continue to improve. I started in April 2015 and have been going ever since.”

Bramble enjoys challenging his client. “Kel and I are working on scapula stabilization and at the same time focusing on functional movement with the affected arm,” he says. “With the lower body, we’re strengthening specific muscles – hamstrings, calves and hip flexors – as well as his core. We alternate upper-body and lower-body workouts.”

At the same time Mabatah is working on the home exercise program his occupational therapist, Imelda De La Garza, OTA, gave him to help him regain the use of his right hand and fingers. Bramble communicates with De La Garza on a weekly basis and incorporates exercises that prepare Mabatah for his return to therapy this summer.

“What we do in Strength Unlimited complements formal physical and occupational therapy,” says Bramble, who has 10 years of experience as a personal trainer and coach and is in his third year with TIRR Memorial Hermann. “We approach recovery from a different place of fitness. Having that kind of variety in exercise can help muscles and nerves react in ways that promote neurotransmission. Typically our clientele is high functioning, like Kel. They’ve gone through therapy and are at a place where they can be challenged physically. If the therapist would like us to focus on developing pure strength, we can do that, although it takes time. If it’s balance, we can continue to work on balance until we reach our goal. In the end, our clients are better prepared for their return to therapy.”

Mabatah describes Bramble as “an amazing trainer, especially when it comes to understanding the connection between physical activity and neurological rehabilitation. We joke and laugh, and every time I work with him I know I’m moving closer to my goal of being able to use my hand and fingers.”

The admiration is mutual. “Kel is very hardworking and humble, and at the same time he has a sky’s-the-limit mentality. He sets goals and stays focused on accomplishing them. In two years I haven’t seen a day when he wasn’t feeling it, when he was not ready to work or improve himself. He’s a very up-spirited, positive person.”

As an athlete, Mabatah is well equipped to go the distance. “The brain heals very slowly so there’s no timetable for my full recovery,” he says. “I’ve made rehab and recovery my full-time job, working out anywhere from six to 10 hours a day. I should have died that night in 2014. The fact that I was given a second chance at life means that God has a bigger plan for me, one that I would never have imagined before my injury. Part of that purpose is to share my story to help motivate and inspire others. I’m working on a book that recounts my journey and recovery after almost being killed. The fact that I’m here and can walk and talk is a miracle in itself. I plan to make the most of it.”

Kel Mabatah wishes “to thank God, because without him, I wouldn’t be alive today, and my family, especially my mother, Hyacinth Mabatah, who has been by my side relentlessly since the day I returned from Nigeria. If it weren’t for her, I wouldn’t be where I am today. I want to dedicate my recovery to her, to my sister, Jacqueline Mabatah, to my friends who have supported me since the incident, and to all my neurosurgeons, doctors, therapists and Eugene Bramble at TIRR Memorial Hermann, who have helped me get to where I am today.”

“Strength Unlimited provides something for almost everyone,” says Tiffany Bollmeyer, program coordinator. “Community members are welcome, and many of our clients come to us during a gap in outpatient therapy sessions, either because they’ve used up their insurance benefits for the year or because they’ve been discharged due to lack of progression toward a goal. If they have a plan of care from formal therapy, we’ll meet with them to discuss their rehabilitation goals and then consult with their therapy team to map out a strategy for progress toward those goals. Others use Strength Unlimited programs as an addition to traditional therapy sessions or as a continuation of therapy for long-term health benefits.”

Programs available through Strength Unlimited include:

For more information and details about equipment available, visit tirr.memorialhermann.org/programs-specialties/strength-unlimited, or contact Bollmeyer at tiffany.bollmeyer@memorialhermann.org or (713) 383-5661.