On the 30th Anniversary of the ADA, Lex Frieden Continues to Advocate for Change 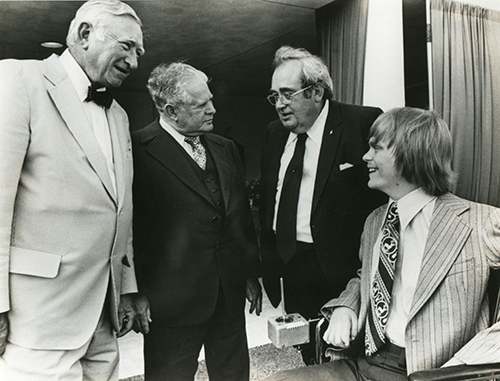 Thirty years ago, last July, a major victory was achieved in the ongoing civil rights movement for legal rights and protections for people with disabilities. On July 26, 1990, the Americans with Disabilities Act (ADA) was passed and signed into law, prohibiting discrimination on the basis of disability and helping to ensure equal access to opportunities. This groundbreaking legislation is recognized today as the most comprehensive disability law in the United States, mirroring and supplementing the Civil Rights Act of 1964 and the Rehabilitation Act of 1973.

On July 21, TIRR Memorial Hermann and the George & Barbara Bush Foundation convened key activists, advocates and policymakers who helped make the ADA a reality for a celebration of that landmark legislation. Equally important, they focused on the challenges that will shape the future of the disability movement. The 90-minute program, entitled “Let the Shameful Wall of Exclusion Come Down,” taken from President Bush’s remarks on July 26, 1990, as he signed the ADA, was moderated by Judy Woodruff, the managing editor and anchor of PBS NewsHour. The National Organization on Disability and Lex Frieden, director of Independent Living Research Utilization (ILRU), a TIRR Memorial Hermann program, worked closely with the Bush Foundation in planning this year’s commemoration.

Frieden, widely considered the chief architect of the ADA, continues to work to ensure equality and promote equity for people with disabilities as an advocate for change and the power of medical rehabilitation.

Throughout life, there are key moments that define who we are and encourage us to take the first step on a future path we couldn’t possibly have imagined for ourselves. For Frieden, one of those moments occurred in November 1967, when he, a freshman in college, was involved in a car accident and sustained a life-threatening spinal cord injury.

“I went to an acute care hospital in really bad condition,” he says. “I couldn’t move. I couldn’t feel anything.”

After his condition stabilized in January 1968, his doctors gave him two options: go home and be in a local hospital for the rest of his life or go to a rehabilitation hospital, a new post-acute care offering at the time, to attempt to regain some level of independence.

Faced with this decision, he and his father visited some hospitals for rehabilitation, a relatively new specialty in the late 1960s. After touring the few facilities around the country, one stood out as the clear choice: TIRR (The Institute for Rehabilitation and Research), now TIRR Memorial Hermann. 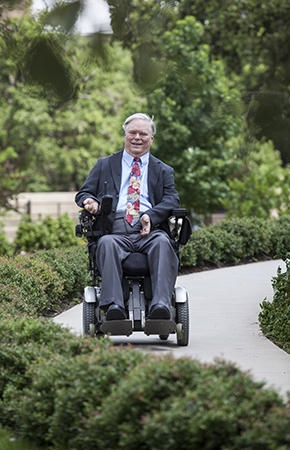 Frieden remembers his father’s personal welcome by TIRR’s founder, William A. Spencer, MD, as well as assistance from employees who had been patients at the facility and the overall relaxed, patient-centered environment.

“My life was changed when my family and I decided to engage in a comprehensive rehabilitation program rather than just stop the world and go home to Oklahoma and live in a hospital,” he says.

After two and a half months of intensive and successful rehabilitation, Frieden went home and reapplied to college. Then came another defining moment in his life.

“I was shocked to discover that I could not even be readmitted to college because I had indicated on my application that I used a wheelchair for mobility,” he says. “That had a profound impact on my life. At that point, I would say I became a disability rights advocate.”

After he was accepted into graduate school at another institution, Dr. Spencer, who became one of Lex’s mentors, invited him to a meeting at TIRR with Congressman Olin Teague. “The meeting with Teague led me to believe that in fact our representatives in Congress could relate to some of the issues we had as people with disabilities,” he says.

Meeting Congressman Teague quickly led to the realization of Frieden’s journey in advocacy, when he was invited to serve on a panel of experts commissioned by a congressional committee that dealt with science and technology. Frieden traveled around the country discussing how people with disabilities could benefit from the latest technology being developed in the then booming space program, giving his unique perspective in the process.

“That also kind of conditioned and reinforced the notion that people with disabilities must be involved in programs that affect their lives, in making decisions about those programs and leading those programs,” he says.

Apparently, nobody understood how you could apply non-discrimination laws to people with disabilities. It just was not intuitive.

Shortly afterward, the first step in legislation ensuring equal access for those living with disabilities was taken with the Rehabilitation Act of 1973. However, Title V of the Act, which would have delegated federal funds to be used for public space accessibility, was not implemented.

“Apparently, nobody understood how you could apply non-discrimination laws to people with disabilities. It just was not intuitive,” Frieden says.

In 1976, in protest of the non-inclusion of Title V, people with disabilities blocked the Golden Gate Bridge and organized a sit-in in federal office buildings in San Francisco, shutting some down for weeks. The following year, Frieden helped found the Independent Living Research Utilization (ILRU) program at TIRR Memorial Hermann, which he currently directs.

As part of the same protest, a candlelight vigil was held in Washington, D.C., to urge then Secretary of Health, Education and Welfare Joseph A. Califano, Jr. to officially sign Section 504 of the Rehabilitation Act. The protest worked, and the section was signed into law.

Looking now to ensure equal rights under non-discrimination protections, Frieden took the next step. In 1983, he gave a testimony before Congress about independent living programs recommended in amendments made in 1978 to the Rehabilitation Act of 1973, which was due soon for reauthorization. A year later, he was appointed director of the National Council on the Handicapped, now the National Council on Disability, by President Ronald Reagan.

Under his leadership, the council produced two special reports, “Toward Independence” in 1986 and “On the Threshold of Independence” in 1988, which produced information on the legislative needs of people with disabilities in the United States. Congress chose not to move forward with the former, and thus the latter was produced with sample legislation called the Americans with Disabilities Act (ADA).

Two weeks after Frieden met with members of the United States Senate and participated in a televised interview in public support of the ADA, George H.W. Bush was made president, and at that moment Frieden was certain his vision was going to be reality.

But in 1990, the year that the ADA was passed, a number of small business owners with financial concerns lobbied against the bill. In response, an historic protest was held in Washington, where people with mobility disabilities abandoned their wheelchairs and dragged themselves up the steps of the Capitol building.

“I thought there aren’t going to be any more barriers,” Frieden says. “Members of Congress came out of the Capitol to encourage us and basically said, ‘You all have done what’s needed to prove to the nation we need this bill.’”

There may be a silver lining somewhere in this cloud. I think there are huge opportunities in adapting our clinical approaches to a telemedical modality, and we really need to exert some effort there... and build programs people can use to seek good medical care from rehabilitation programs in telemedicine and remotely.”

While the 30th anniversary of the ADA is cause for celebration to commemorate the strides that have been made in securing equal rights for people with disabilities, it is also a time for reflection and review of areas that still need attention. One such area is employment, where Frieden mentions rates are almost the same as they were 30 years ago.

Another central issue that has yet to be resolved is access to affordable housing, about which Frieden says, “People are stuck in places where they don’t belong, simply because there’s no other place to live.”

Over the years, disability rights advocates made major progress in health care, especially with the Affordable Care Act, but with the change in administrations, this progress has been reversed.

Frieden says that since employer-paid insurance can now factor preexisting conditions into their insurance assessments, many are worried that they will lose their coverage and/or compromise their Medicare and Medicaid benefits. He also advocates for and is proposing a better community-based infrastructure, where a team can provide services to people with disabilities in their homes. In this new model, caregivers and assistants would be on call and provide support for daily tasks, such as preparing meals and putting on clothes.

Finally, he sees opportunities brought on by the public health emergency of COVID-19 for those with disabilities, in that remote work has become a viable option for many industries and their employees, in addition to the growth of telehealth offerings.

“I think COVID-19 may improve opportunities for people with disabilities, as we’ve proved that remote work can be done effectively,” he says. “There may be a silver lining somewhere in this cloud. I think there are huge opportunities in adapting our clinical approaches to a telemedical modality, and we really need to exert some effort there . . .and build programs people can use to seek good medical care from rehabilitation programs in telemedicine and remotely.”

So how can someone, as Frieden did, take the first step on a journey of advocacy? “People should take initiative, and they should be assertive, and they should expect to be treated equally and not simply resign themselves to a lifestyle that they may have perceived living, but instead be aggressive and attack those barriers,” he says.

Frieden gave numerous recommendations for how to get started, including being in touch with the local mayor’s office, working in campaigns for candidates who have solid platforms on disability issues and participating in centers for independent living. Organizations like the United Spinal Association for those with spinal cord injuries and the American Association of People with Disabilities, which Frieden helped found, also provide platforms for advocates and offer peer support.

The Power of Medical Rehabilitation

In January of this year, Frieden was again a patient at TIRR Memorial Hermann for rehabilitative care for 10 days after he was intubated and treated in the ICU for pneumonia. “If I had been discharged from the ICU to my home, it’s very likely that I would not be mobile in the wheelchair right now; I’d still be recovering from the results of the intubation, from the ventilator and from the treatment I received to get over the pneumonia.”

Frieden went on to explain the power of medical rehabilitation, saying, “When I left there, I felt like I was actually more fit than I was before I had the pneumonia and probably more fit than I had been for three years.”

Given the variety of post-acute care options, making a decision about where to be treated can be difficult, but for Frieden, as it was back in 1968, the choice was clear.

“My advice to people who have the option is to choose the elite care that one would get in a comprehensive medical rehabilitation facility,” he says.

Two years ago, when Frieden formally accepted the American Medical Rehabilitation Providers Association (AMPRA) National Leadership Excellence Award, he recalled that one of his doctors told him, “You can anything you want to do, as long as you can figure out how to do it on four wheels.”

This article was originally published by the American Medical Rehabilitation Providers Association (AMRPA) in collaboration with TIRR Memorial Hermann.