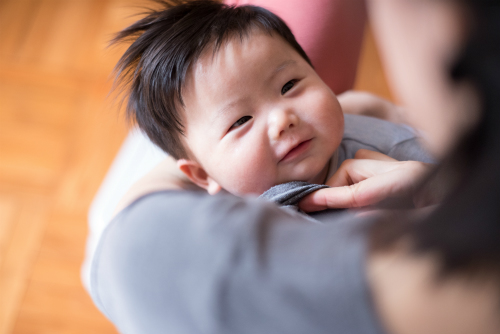 Babies grow and change so rapidly, it’s normal to want to hit the pause button and savor every sweet minute. It’s also normal to wonder, amid all these changes, whether your little pride and joy is developing, well, normally.

When we asked Dr. Joseph Edralin, a pediatrician affiliated with Children’s Memorial Hermann at Memorial Hermann The Woodlands Medical Center, to identify the milestones of early childhood, he told us what he tells every parent who visits his office: each child is unique, and in most cases there’s no reason to worry. Still, there are benchmarks that every parent should look for from birth through toddlerhood.

Crying: “Newborns are going to cry quite a bit,” said Dr. Edralin. “It is just how they communicate they’re hungry, tired, or simply want the attention.”

Laughing: “By this time, they should be laughing and showing signs of learned social behavior.”

Baby food: “You can start with simple foods at anywhere from four to six months if on formula, and five to six months if breastfeeding. Select simple foods like carrots or peas – as long as they’re mushed and bland. You’re just introducing new textures at this point so flavors like salty or sweet are too much, too soon. There’s no need to rush.”

Bottles: “If they can begin to grasp and hold a bottle on their own – usually around six months – you can begin to move them on to a sippy cup, and by a year or 15 months, get off bottles completely.”

Rolling over: Most babies learn to roll over between seven and nine months.

Crawling: This usually takes place at seven to ten months.

Walking: Actually, some children start at nine months, while others wait until they’re 16 or 17 months. “There’s a huge range of early and late norms for this development,” says Dr. Edralin. One thing to remember: “Your baby develops from top to bottom and inside out. What that means is, once your child can sit up and support his own weight, he’ll develop the core strength to stand and support the rest of his body to begin walking.”

Grasping: Most babies can pick items up with minimal effort at nine to 12 months.

Talking: “Talking has a lot to do with the social interaction children have with you directly,” says Dr. Edralin. Translation: make sure to talk to your kids in those crucial early months. “By 12 months, they should be speaking.” Interestingly, children raised in bilingual households often do not speak until they are a bit older.

Potty training: “A toddler 18 months to age 3 should be well equipped with their early skills to be able to tell you they have to go.”