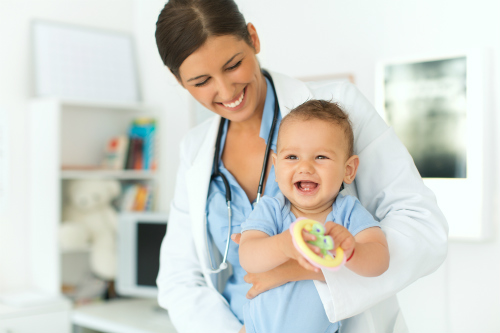 When summertime arrives, it is all but guaranteed that Dr. Samuel Prater, Medical Director of Emergency Services at Children’s Memorial Hermann Hospital, will see certain injuries. But just as Houston’s warm weather doesn’t respect the seasonal calendar, neither do its attendant injuries, which is why parents must take precautions year-round. Follow Dr. Prater’s tips to keep kids out of the ER and avoid these preventable accidents:

“If you’re mowing the lawn and have small kids, they’re probably safest inside,” says Dr. Prater. Letting a child sit on a riding mower could lead to loss of a foot, a limb, or a life. Children shouldn’t be near active mowers, either, as they could be severely injured by flying rocks.

Because summer is so hot, teens and adults like to do their mowing when it’s getting dark, but Dr. Prater advises mowing in full daylight to increase visibility. Dim lighting at dusk can hide rocks under heavy grass or otherwise obscure the terrain, which could cause riding mowers to flip. Further, Dr. Prater advises, anyone mowing a lawn should wear safety goggles, long pants and closed-toe shoes. Shorts and flip-flops won’t provide enough protection from flying debris.

Secondary drowning occurs after a near-drowning incident, when a swimmer has been submerged underwater long enough to ingest water into his lungs before rescue. The child may have an initial reaction – crying, coughing – then seem fine for minutes or hours after the event. In some cases, however, the water ingested can cause lung inflammation and then further problems, including loss of consciousness, brain damage, or even death.

Secondary drowning can happen to swimmers of any age, in any situation – swimming pools, ponds, the ocean – but is most common among younger children.

Did you know? Drowning can occur at all ages, but is most common among younger children.

What Are Some Signs to Look For?

Dr. Prater advises parents to watch for rapid breathing or grunting, coughing, shortness of breath, chest pain, and irritability. If a child shows these symptoms after ingesting water, he needs to be taken to the closest emergency room. Physicians at local emergency rooms can provide stabilizing treatment and decide whether the child needs to be transferred to a hospital. Parents shouldn’t risk driving a long way to the hospital with a child showing these symptoms. Children sometimes also exhibit cyanotic signs – a blueness inside or around the mouth, or blue-tinted nail beds. “If you see these signs, call 911,” Dr. Prater says.

Fireworks are fun but can be dangerous. Although they are sold only twice a year in Houston, Dr. Prater sees their effects in the emergency room year-round when, say, fireworks have been stored for later use or children find them after they have been discarded. Injuries include burns, of course, but also eye injuries from projectiles and even fingertip amputations caused by mini-explosions. Sparklers – those “pretty wands” of sparks many consider appropriate for the youngest Fourth of July celebrants – are particularly dangerous, Dr. Prater warns. “Sparklers can get insanely hot – up to 1,000 degrees Fahrenheit,” he says. Their sparks can come into contact with children’s hair or, at the New Year, trailing scarves and sweaters. Burns from sparklers are often third degree in depth and require operative management.

What if an accident does happen despite your best attempts at firework safety? What can you do before going to the emergency room or while waiting for an ambulance to arrive? In case of fire and burns, Dr. Prater advises parents to put out the fire, remove hot clothing and rinse the affected areas with lukewarm water. Ice water could make burns worse. In the case of sparks or projectiles going into a child’s eye, Dr. Prater strongly cautions parents not to let the child rub the eye, because that could cause further damage. Instead, gently rinse the affected area and keep the eye covered until professional help arrives.