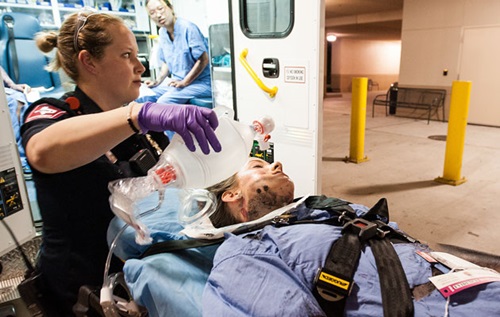 While the crisis was not real, the response that quickly followed was. Teams from various agencies across the region jumped into action, just as they would if the unlikely scenario were ever to occur.

In the exercise, known as Operation May Day, the Life Flight Communications Center activated missing aircraft procedures, dispatching another aircraft and ground emergency responders to find the missing chopper. Each was given the missing aircraft’s last known location. To enhance the realism, an out-of-service Life Flight aircraft had landed at the training grounds used by The Woodlands Fire Department, where it awaited discovery.

When the downed helicopter was spotted, firefighters, Montgomery County Hospital District (MCHD) EMS and the Shenandoah Police Department headed to the incident and encountered four seemingly severely burned patients, three adults and one child. Actually, the injured were nursing students from Texas Woman’s University who had volunteered to play the part. “Moulage” techniques – the use of makeup, molding and casting – were employed to simulate the victim’s injuries and burns. Each patient had a set of symptoms to challenge rescuers and clinicians.

The patients were transported by paramedics to Memorial Hermann The Woodlands Medical Center for treatment. There, treatment teams made the decision to transfer the patients via Life Flight to the Red Duke Trauma Institute, Houston’s only Level I trauma center for both adults and children. There, four other volunteer nursing students, who had been outfitted with the same injuries through moulage, were on the helipad and ready to be taken to the Emergency Center and the John S. Dunn Burn Center. 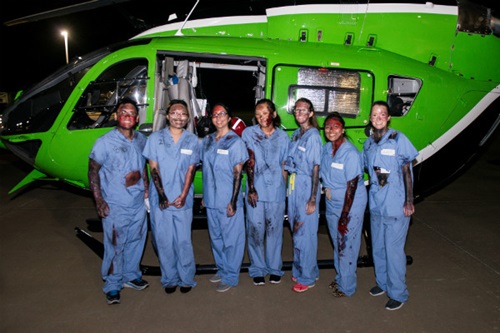 “Our goals were to evaluate the efficiency of each of the separate disciplines involved,” says Tom Flanagan, Vice President of Trauma Service Line and System Integration. That includes how well communications were handled, the medical decisions made and treatment times achieved, and the efficiency of the transfer and transport process. Evaluators were on hand at both locations to document how well participants performed.

Police and firefighters also used this as an opportunity to evaluate and learn. “Exercising our teams with our partners at Memorial Hermann is an annual goal of The Woodlands Fire Department,” said Fire Chief Alan Benson. He lauded the aviation crash scenario as being a “very good test of our fire and EMS crews.”

He added that interagency cooperation fostered by training in such crisis scenarios is vital. “There’s often fragmented communication in situations like the one we trained on, and there can be duplication of efforts and confusion. Knowing your partners in advance builds trust among the various agencies. That’s very helpful in a real-world situation so that we are all on the same page.”