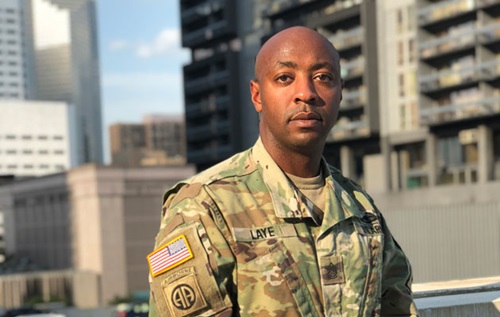 United States Army Sergeant First Class Nick Laye arrived at the Memorial Hermann Red Duke Trauma Institute with extensive limb-threatening injuries to his right leg. The list of injuries was long: a segmental femur fracture, open tibial plateau fracture, proximal fibula fracture, peroneal nerve injury, significant circumferential loss of flesh and other soft tissue from the lower thigh to mid-leg, and soft-tissue degloving of the ankle that exposed his ankle bone. He had lost one artery supplying his right leg and had a large open wound above the left knee.

Laye, 35, sustained the injuries when the motorcycle he and his fiancée were riding slammed into the side of a Ford F-150 that crossed into his lane, pinning his right leg between the truck and motorcycle.

His fiancée, Megan Cervantes, 31, was thrown 20 feet, landed and rolled, suffering minor scrapes and bruises. A passerby stopped and called 911, while Cervantes limped over to Laye and began alerting his Army chain of command and his family. “She held my head up and kept me alive,” he says.

The accident occurred on Jan. 15, 2018, the day before Laye’s mother’s 60th birthday. “This was my first major surgery ever, and I was terrified,” he says. “In the OR prep room I talked with my doctors and the entire surgical staff. I told them I’d had 17 years in the Army, have a six-year-old daughter that needs her father, and that today was my mother’s birthday. ‘You can’t let me die today,’ I said. Dr. Warner looked at me and said, ‘I get it. You’re scared. You have serious injuries, but you’re not a unique case. This is what we do 365 days a year. Don’t worry – we’ll take good care of you.’”

Laye’s case is an example of the coordinated trauma care available to patients at the Red Duke Trauma Institute: a tightly choreographed effort involving the orthopedic trauma team, plastic surgery team and specialists from other disciplines. “Our goal is always to repair the damage in ways that maximize function for severely injured patients,” says Stephen Warner, MD, PhD, an affiliated orthopedic trauma surgeon and Assistant Professor of Orthopedic surgery at McGovern Medical School at UTHealth. “Nick is a great success story. Like all of our patients, he didn’t expect to end up in the hospital when he woke up that morning. For us, bringing patients back from life-severe injury is routine. When they know they’re in good hand with our team, it puts them at ease.”

Over the next three weeks Laye had surgery almost every 48 hours – 10 surgeries in total. “Early on we placed an intramedullary nail to repair the segmental right femur fracture and, in coordination with plastic surgery, took him back every couple of days to clean out the open wounds over the right and left knee,” Dr. Warner says. “We were in constant communication with Dr. Emmanuel Melissinos, MD, who heads the plastic surgery team. When we do bony fixation in large open wounds, we carefully coordinate our work to minimize the time between placement of orthopedic implants and soft-tissue coverage by plastic surgery.”

Dr. Melissinos and his team cleaned the wounds gradually with multiple irrigations and debridements. “Our goal is to decrease the risk of infection and get to healthy tissue for subsequent soft-tissue replacement,” says Dr. Melissinos, a clinical professor with joint appointments in the division of Plastic and Reconstructive Surgery and department of Orthopedic Surgery at UTHealth, who specializes in microsurgery, post-trauma reconstruction and reconstructive plastic surgery. “This can’t be done in one sitting, so from day one, the orthopedic trauma, reconstructive plastic surgery and microsurgery teams were involved in decision-making every step of the way.”

When both teams were comfortable with the condition of the soft tissues, Dr. Warner placed fixation for the tibial plateau and proximal fibula. The plastic surgery team created a free flap from the latissimus dorsi muscle and covered the metal implants with skin grafts from mid-thigh to mid-leg.

“Dr. Warner came in every other day to check on me,” Laye says. “When I asked him how long it would be before I could play soccer, he said, ‘We’ve done our part. The rest is up to you.’ That was a good phrase for me to hear. It pointed out to me that there’s a part of the healing process that I have to own as well.”

Initially, the doctors told Laye that he could expect to walk without crutches after eight months and would be fully healed 18 months post surgery. Just four months after his discharge from Memorial Hermann-TMC, he could walk around his apartment and office without crutches.

“Nick’s rapid recovery is testimony to his motivation to achieve maximal benefit from the work our team did for him,” Dr. Warner says. “He approaches life with a positive attitude and was also very fit before the accident. Both of these things can help speed recovery.”

Laye credits his recovery to Drs. Warner and Melissinos and the orthopedic trauma and plastic surgery teams at the Memorial Hermann Red Duke Trauma Institute. “Other doctors have told me that I easily could have faced a mid-thigh amputation. The work these people did to save my leg was amazing,” he says.

“Both doctors were very direct about my treatment plan, how long the surgeries would take and what I might expect in terms of healing,” says Laye, a Houston Recruiting Battalion leader who is responsible for seven soldiers and their families. “Dr. Melissinos was there for every single surgery. When I came out of anesthesia after my last surgery, he was the first person I saw. I smiled so big when I saw him and he looked at me and smiled back. He came over and shook my hand. It was a memorable moment. The next memorable moment was when he looked at my leg during a follow-up visit and told me my leg wasn’t supposed to heal that fast. Those were great words to hear.”

He also credits his home health agency and his physical therapist who has come to his house twice a week since he was discharged from the hospital in mid-February. “She has pushed me to recover day in and day out,” he says. “I told her on day one that I needed to be able to walk by the end of May because my daughter would be coming to visit over the summer. She developed a plan, held me to it and kicked my tail until we achieved that goal.”

“I’m able to walk, bicycle and jog approximately six months ahead of schedule due to my physical therapy and the treatment I received from both Dr. Melissinos and Dr. Warner,” adds Laye, who is now doing physical therapy at the Memorial Hermann IRONMAN® Sports Institute. “I expect to be able to run before the end of the summer. I’ve achieved my goal.”