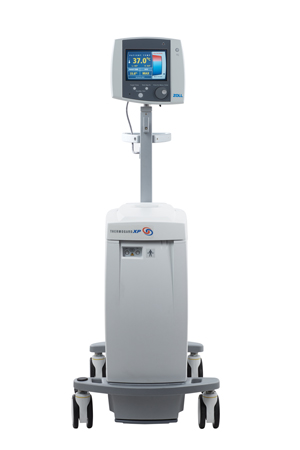 Heatstroke is serious business. When the body reaches temperatures above 104 degrees Fahrenheit (40 degrees Celsius), the risk of permanent organ damage and even death rises with each degree. So, when rescuers brought a patient to Red Duke Trauma Institute at Memorial Hermann-Texas Medical Center with a body temperature of 108 degrees Fahrenheit (42.2 Celsius), there was no time to waste.

“The body does not like to be at that temperature for long,” said Dr. Samuel Prater, director of emergency services at Red Duke Trauma Institute, who led the team that treated the patient. The longer body temperature remains elevated, the greater the risk of damage to the brain, heart and other vital organs.

Traditionally, emergency room staff bring body temperature down by packing the patient’s groin and axilla with ice packs and applying cooling blankets. They can also administer cold fluids by IV or insert chest tubes to circulate ice water in for chest lavage. According to Dr. Prater, these methods generally take one to two physicians as well as several nurses to administer, and it can take a few hours to bring the temperature down.

This time, Prater decided to try something new. The staff had just finished training on an invasive catheter system designed to cool the body after a patient experiences cardiac arrest, the Zoll Thermogard XP® Temperature Management System. To use the system, the physician inserts a catheter into the central venous system via femoral, subclavian or internal jugular vein, allowing cooled saline solution to circulate through the body in a closed loop. Developed to cool the body after a heart attack to help improve neurological outcomes, Red Duke Trauma Institute had been using the system for six to eight months with good success, says Dr. Prater. “We knew how well it worked for cardiac arrest patients taking a patient from a normal temperature to a very low temperature,” Dr. Prater explained. That track record made him think it might work to bring down temperature in hyperthermia cases like this patient.

Dr. Prater inserted the intravascular cooling catheter rapidly, then “let the machine do the work” of lowering the patient’s temperature. Meanwhile the nurses checked the patient’s vitals and glucose and monitored for any metabolic abnormalities, bleeding in the brain or signs of heart attack.

Within an hour, the patient’s temperature was down to 101. In less than 30 minutes more, it had dropped to 100. At that point, Prater disconnected the patient from the system to prevent hypothermia.

The patient walked out of the facility with no obvious deficits, apart from a bit of short-term memory loss about how the patient got to Red Duke Trauma Institute—not a common outcome with a temperature that high.

Prater is sold on the method, which achieved cooling much faster and with less staff time and effort. “I would never again try to put chest tubes in somebody to lavage their chest with ice water or use external cooling measures like packing their groin or armpits with ice packs,” he said. “This was just so much quicker this way and much less resource-intensive.”