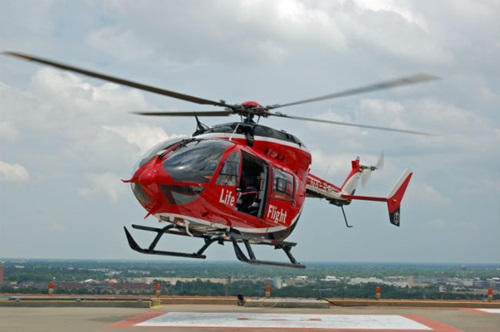 In 1973, hospital trustee and local philanthropist John S. Dunn funded a helipad that was built over the entrance to the Emergency Center. According to Dr. Duke, "Since I was charged with getting a trauma service started, I thought we should figure out a way to use it." District Chief Martin told Dr. Duke of an air ambulance program in Denver called "Flight for Life," the first of its kind in the country. With the support of Bill Smith, CEO of what was then Hermann Hospital, Dr. Duke went to Denver to learn more. "The reception wasn't all that warm, but I found out we could do it here."

Together with Smith, Dr. Duke approached Hermann Hospital's board of trustees about funding to start a civilian air medical program to transport critically injured Houstonians to Hermann Hospital. The board agreed to provide funding for six months to lease a helicopter and pay the pilots and a mechanic. "Now we just had to figure out how to create an EMS flight crew since no one had done it before. We recruited flight nurses out of the ICU and the ER, and we all sat down in the hospital cafeteria to write down protocols - everything from landing zones to how you behave around a helicopter."

The first Memorial Hermann Life Flight® mission took place on August 1, 1976, with an Alouette III helicopter equipped to hold one patient, a pilot, a flight nurse and a surgical resident. They flew three missions that first day, and 45 in the first month. Dr. Duke was named as the first medical director of Life Flight, and the program was granted an additional six months of funding by the board of trustees.

"We didn't have a lot of supporters at first," said Dr. Duke, who had begun advocating for an improved transfer communication system for the program. "Our transfer system in those days was a red telephone on the front desk of the ER. But that changed in 1977 when Life Flight transported people from the Texaco refinery explosion in Port Arthur. That was the first time we received serious media attention. After that, more people got involved." Soon, Life Flight was responding 24 hours a day without question to EMS, law enforcement agencies, physicians, other hospitals and industrial safety officials, and the program received funding to establish its first transfer center. There were no existing models to duplicate, so once again the group pioneered new territory from the ground up, creating a system which started out as transfer logs transcribed by hand.

By 1978, the fleet had grown to include three Alouettes, each staffed with a three-person crew. Paramedics eventually took the place of physicians on the aircrafts, serving as routine crew members alongside a registered nurse - which is the configuration still used today. Life Flight added a fixed wing program to fly patients to and from hospitals all over the world in 1979.

In 1983, the Alouette III helicopters were replaced with Twinstars, which were in service until the purchase of three BK 117s in 1988, which were more recently replaced in 2006 with Eurocopter EC 145 helicopters. The new aircraft had enough room to transport and care for two patients, as well as rear doors to make loading and unloading patients easier and safer. In 1997, Hermann Hospital merged with Memorial Hospital System, and Hermann Life Flight became Memorial Hermann Life Flight.

Today, the Life Flight fleet has six state-of-the-art EC-145 twin-engine helicopters, equipped with advanced emergency equipment to help save the lives of those being transported. With more cabin space than the previous aircrafts, the new Life Flight fleet can carry two stretchers in its cabin, along with two medical personnel and one pilot.

Please consider making a donation to Memorial Hermann Life Flight. No matter which area of the mission you support, your gift will make a lasting impact on patients and their families.