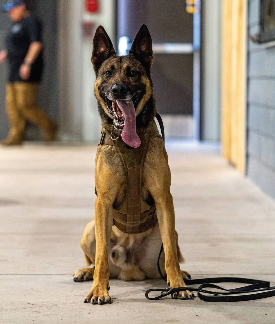 Houston Police Department Senior Officer Paul Foster credits the first aid training he received from Memorial Hermann Life Flight® for enabling him to save the life of his K9 partner, Nate. The 4-year-old Belgian Malinois was stabbed by a carjacking suspect on January 22 in a Houston Heights neighborhood as the suspect fled from law enforcement.

As Nate took down the suspect, the dog sustained a 9-inch deep stab wound to the chest, severing multiple arteries. “Even after he was stabbed, Nate was still going after the guy,” says Foster. “He’s an amazing dog.”

On scene, Foster relied on the training he received in Life Flight’s K9 Casualty Care Course—and used medicated gauze from a kit provided during the course—to pack the dog’s wound before rushing him to an emergency veterinary hospital. (Foster says he would have called for Life Flight, had the emergency vet not been so close by.) When they arrived, Nate was in critical condition.

“The moment I realized Nate was injured, Life Flight was the first thing that crossed my mind,” says Foster. “And I’m not just saying that.”

Life Flight launched its K9-Casualty Care Course (K9-CCC) and Transportation Service in December 2020, making Life Flight the first air ambulance service in the nation to provide training, treatment and transportation for injured K9 officers. Foster was among the first to be trained.

The K9-CCC program provides K9 handlers with emergency care training for their K9s, including wound packing, poison control, CPR and tourniquet use. As part of the training, each handler receives a K9-specific Individualized First Aid Kit (IFAK), which includes wound packing material, gloves, CPR mask for human-to-K9 CPR and a tourniquet. Handlers are also trained on when it is appropriate to call Life Flight for severely injured K9s.

Foster is thankful for the knowledge he gained. “We (handlers) have to be prepared, mentally and physically, to provide initial trauma care on scene, for both our human and K9 officers,” he says. “And this is the best K9 training I have received. Without that training, without that kit, I don’t think Nate would have survived.”

The desperation in Foster’s voice on his call to dispatch that day was palpable. He describes Nate as his “soul dog” and considers him a part of his family. Since Nate joined HPD 3 years ago, the two have been inseparable.

Although Life Flight was standing by to transport Nate to Texas A&M for surgery, the surgery in Houston was successful, and Nate is recovering—although apparently not as quickly as the dog would like. “He’s anxious to get back to work,” says Foster. “He has no ‘off’ switch. His mind wants to go, go, go!”

If all goes as planned, Nate should be back in action in a few weeks.

To learn more about the Memorial Hermann Life Flight K9-Casualty Care Course and Transportation Service, or to enroll in a training program for your agency, please contact George Tarver at George.TarverIII@memorialhermann.org or call (713) 875-9071